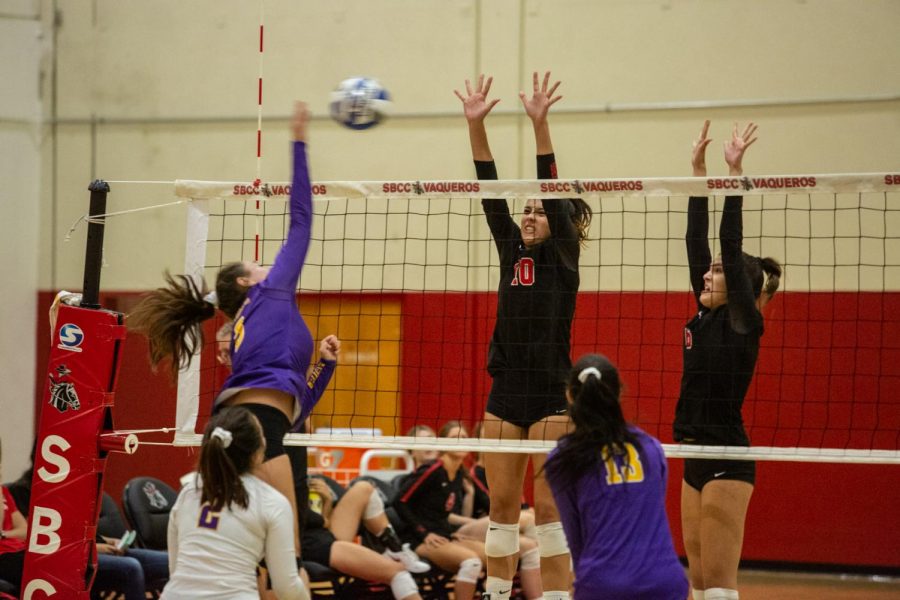 Vaqueros players Gabi Brewer (No.10) and Jordan Falconer (No.6) leap over the net to defend the opponents strike on Tuesday, Oct. 2, 2019, in the Sports Pavilion at City College in Santa Barbara Calif. The Vaqueros beat Cal Lutheran JV 3-0.

The City College women’s volleyball team captured their fifth win of the season against Cal Lutheran Junior Varsity on Wednesday night, despite some Vaquero players being sick.

“We had a good week of practice, we’ve been a little under the weather with a couple of different sickness’ going through the team,” said Head Coach Kat Niksto.

“I’m very proud of our players on working hard through out the game even though they are sick. Madi Mullins and Gabi Brewer had missed the last two practices and it was great to watch them go out and lead the team in points,” she said.

Brewer led the team with 16 points, while Mullins followed closely behind with 10. Makenzie Phelps also made some noise, scoring 10.5 points for City College.

The match was not a league game, but it didn’t stop City College from working hard and maintaining focus throughout.

“I told the girls all along, that our main focus is getting better. We can’t control the opponent, whether it’s best team or the worst team in the country,” said Niksto.

“We came into the game with a lot more confidence,” said Mullins. “We wanted to use tonight to get better.”

“I’m very proud of our team for not giving up,” said Niksto. “We just have to keep working hard in practice and great things will come.”

The team returns to the Sports Pavilion at 6 p.m. on Friday, Oct. 4 to face Ventura.