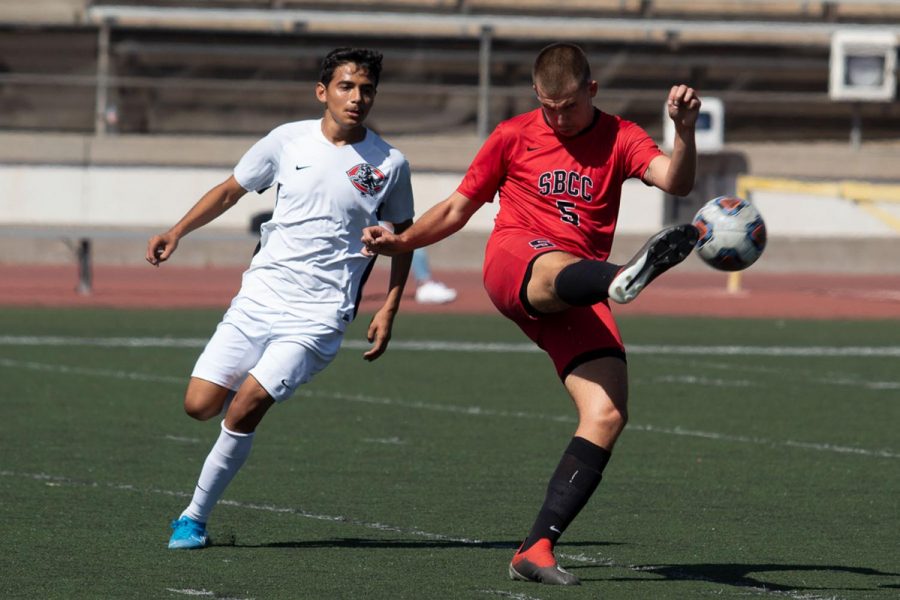 It only took one minute for the Vaqueros to get on the board courtesy of Freshman defender Roni Spektor who sprung over a Chaffey defender for the game’s first goal.

“It feels good to get a goal,” said Spektor. “It’s always fun to score and if it helps the team win it is even better.”

The hot start continued when Christopher Robinson received a pass from teammate Jonas Romero. Robinson took the ball and blasted it past the Chaffey goalkeeper to make it 2-0 only six minutes into the game.

“We just had it in us for short bursts today, I got a great pass from Jonas and to be honest it was an easy goal to finish,” said Robinson.

After an hour of play, Chaffey pushed back when it got a free-kick outside the 18-yard line. Forward Marco Rodriguez to a shot that slipped past the hands of City College goalkeeper Sycamore Mitchell to make the score 2-1.

Robinson was awarded a penalty kick when he was clipped by a Chaffey defender inside the goal.

Sophomore Saul Sosa stepped up and extended the lead to 3-1.

At the 70-minute mark, Robinson received the ball from teammate Fernando Ochoa and kicked low into the bottom right corner, extending the lead to 4-1.

“Chris has been a thorn in everyone’s side this year, he’s so quick with his change of pace and direction he’s a very good player,” said Head Coach John Sisterson. “I’m glad he’s on our side because I wouldn’t want him on somebody else’s side.”

The Chaffey Panthers kept pushing and were able to get two goals back in the last 10 minutes of play, but City College was able to maintain the lead and walk away with the win.

“I think we just got nervous for some reason, we were up 4-1 we looked comfortable,” said Sisterson. “We let one in and then coughed up another so we have to learn from that, the positive thing was that it was a good result but I felt that it shouldn’t have been 4-3 we let it slip a little at the end.”

The Vaqueros are back in action at 7 p.m. on Tuesday, Oct. 8 at La Playa Stadium as they battle Citrus College.