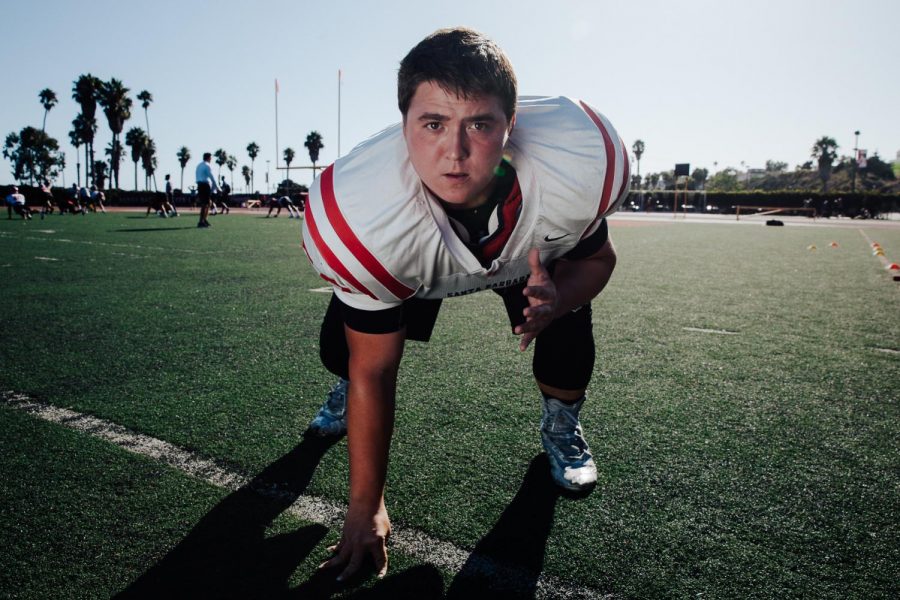 Vaqueros offensive lineman Brenden Chapman holds a ready stance on La Playa Field just before practice on Monday, Sept. 30, 2019, at City College in Santa Barbara, Calif. Chapman or “Chappy” as his teammates call him, is a stage-four colon cancer survivor and sets an example of toughness and resilience that head coach Craig Moropoulos believes the other players can learn from.

Far less obvious is the fact that the upbeat 24-year-old, known as “Chappy” amongst his teammates, spent several months of his young adult life battling colon cancer.

After graduating high school at 17, Chapman moved from his hometown of Salem, Oregon to Los Angeles, where he got a job at Blaze Pizza. He moved to the Santa Barbara area when Blaze opened an Isla Vista location and stayed with his sister, who was living there at the time.

It was then that he began to experience severe stomach pain, a “crampy, achy feeling,” that a variety of doctor-recommended diets could not cure.

“For a bunch of two-week intervals, I was trying gluten-free, dairy-free, vegan, a bunch of just silly stuff to see if it helps my stomach,” Chapman said.

A scan of his colon revealed a mass, which was later confirmed to be cancerous.

Chapman suffers from Lynch Syndrome, an inherited disorder that increases the risk of many types of cancer. His mother and grandmother had both battled colon cancer in their lives.

Although the surgeons successfully removed the tumor, they discovered the cancer had spread to his lymph nodes and would require chemotherapy.

“He’s very mature,” said Chapman’s friend and teammate Sage Sobrado. “Especially at this level with a lot of distractions at a junior college playing sports it’s easy to get caught up, but he hasn’t slipped.”

Chapman and Sobrado bonded because Sobrado also had intestinal issues, which led to them becoming each others support on the team.

After his surgery, Chapman returned to Oregon to be with his family during the treatments.

“The chemo, that was terrible,” Chapman said.“I just felt crappy all the time, I didn’t want to do anything. Food felt tasteless. I was the least happy, it was really hard to get a smile.”

Throughout the diagnosis and treatments, Chapman dropped from 225 pounds to 165.

“I wouldn’t wish that on anybody, because you almost feel like your life is wasting away,” he said.

Chapman’s body responded well to the treatment and recovered quickly, in part because colon cancer is very rare in people under the age of 50.

After six months of treatment and another three of recovery, Chapman returned to Santa Barbara and resumed working.

However, battling cancer had made him wonder if there was more he could get out of life beyond working at a pizza shop.

“I had this realization that I had kind of peaked,” he said. “Where I was there was really nowhere else to go.”

Chapman eventually made the decision to enroll at City College, with the hopes of opening his own restaurant.

With his enrollment came the opportunity to play football for the first time since high school.

Despite being undersized for an offensive lineman at 5 foot, 7 inches and needing to regain muscle after his treatments, Chapman made an immediate impact on the Vaqueros team.

“What stands out to me is his commitment, loyalty, and dedication,” Head Coach Craig Moropolous said. “And I thought that before I knew about his condition. He’s there every day at practice and he gives everything he’s got.”

Moropolous said he hadn’t found out about Chapman’s health background until months after he started playing for him.

Chapman is currently recovering from a separated shoulder, but he hopes to be back in action for the Vaqueros this week as his second season gets underway.

Whether or not he is on the field Saturday evening against Antelope Valley, the team will feel his presence.

“He’s very emotionally and mentally strong, and I think that helps the team and me know what’s going on,” Sobrado said. “He’s the rock.”