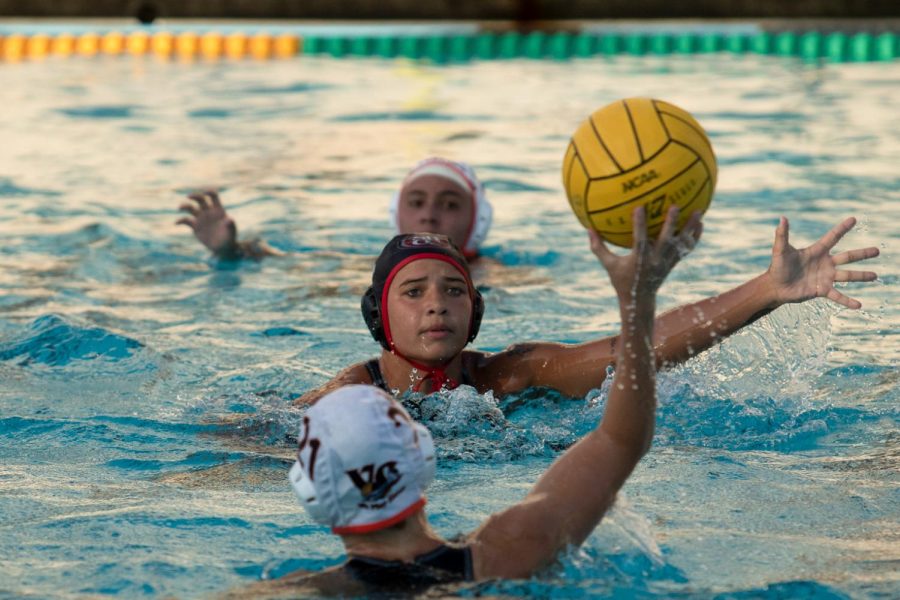 Taylor Brooks charges down Sierra Cameron before passing to a teammate on Wednesday, Sept. 25, 2019, at Santa Barbara High School in Santa Barbara, Calif. The Vaqueros came out with a 10-4 win against Ventura College.

City College got on the board quickly with its first goal 36 seconds into the game. The team had a 3-0 lead by the end of the first quarter, dominating 7-1 by the second quarter. Ventura made its first goal at the half and scored three more times after, but came up short.

“It’s always a team effort with this group,” said Coach Chuckie Roth, who is entering his sixth season as head coach.

“Annie Ackert shoots the heck out of the ball. She’s a grinder, she’s a hard-working kid who doesn’t know how to not work hard,” said Roth.

Ackert helped the Vaqueros by scoring four goals, including one five-meter shot.

“Our goalie Zoe Johnson was really good today in the first three quarters. She did a really good job,” said Roth.

“I feel honored because Chuckie’s opinion matters greatly to me, and I’m really glad that he’s my coach and I’m here,” said Johnson. Johnson had five saves in the goal and is a first-year at City College.

“I’ve been playing since seventh grade,” she said. “My first coach met my parents and they are very tall so he said ‘You are going in the [goal].”

This is the first game City College has played at Santa Barbara High School after having played previous seasons at San Marcos High School.

This season, it’s not only a fresh setting but also a fresh-faced team.

“This is a very young group, we’re very new to each other. I have one returner and a few girls who have played together,” said Roth. “Today was hard. We were trying to work on some new things that we haven’t done yet and that created a little disorganization.”

In the end the Vaqueros sunk the Pirates 10-4. Ventura fell to 5-4 overall and the Vaqueros improved to 11-1. City College will play all their October matches on the road and will return home for the Halloween Invitational at 5 p.m. on November 1 at Santa Barbara High.