SBCC loses close game against Chaffey, falls to 1-4 this season 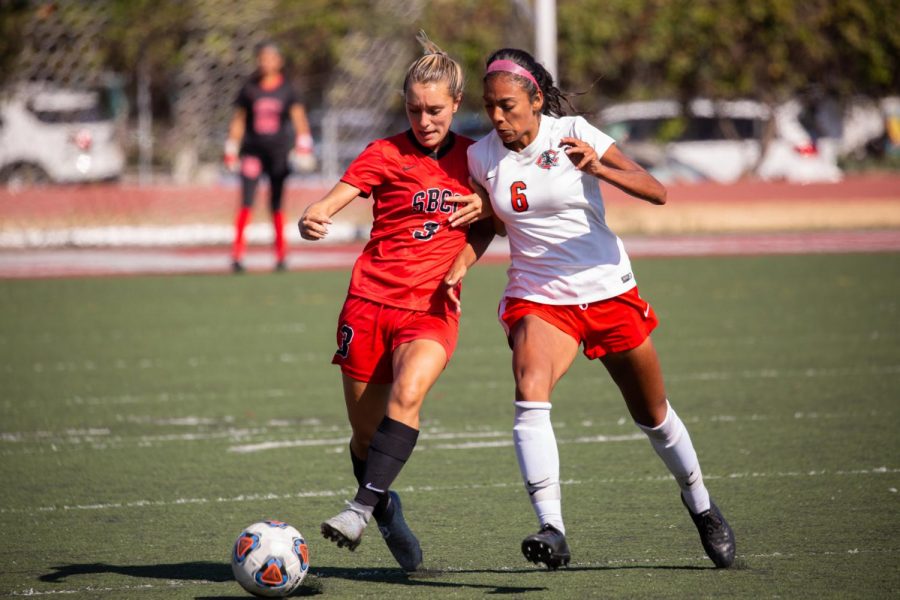 Taylor Valle (No.3) battles her way down field against Mylinda Gomez (No.6) on Tuesday afternoon, Sept. 17, 2019, at La Playa Stadium at City College in Santa Barbara, Calif. The Vaqueros lost to the Chaffey College Panthers 2-1.

The City College Women’s Soccer team lost to the Chaffey Panthers Tuesday at La Playa Stadium, dropping them to 1-4 on the season.

The team scored within the first 10 minutes of the game but was not able to add to its early lead and lost its second consecutive game at home.

The Vaqueros’ only goal came from freshman forward Mekaylla White. White kept her composure and kicked the ball towards the left side of the net. It deflected off a Chaffey defender and went in.

39 minutes into the match, Chaffey was awarded a penalty kick off a questionable call.

The Panthers did not waste the opportunity and tied the game at 1-1.

“I felt it was a bit dubious, the penalty kick that got called against us,” said Head Coach John Sisterson.

It was a punch in the stomach for the Vaqueros to end the first half conceding a goal and they weren’t able to regroup in the second half.

The final goal of the game came when Chaffey’s Angel Rodriguez ripped a shot into the bottom right corner of the net past sophomore goalkeeper Elizabeth Estrada.

“We put our heads down after they made that second goal, this was a good team we just need to open up more, create more chances and put them in,” said Estrada.

“It was a hot afternoon, we just looked jaded. We need to address that, find out what’s going on with them and pick them up for Friday,” said Sisterson.

After three games on the road, the Vaqueros return home to battle Ventura College at 7 p.m. on Tuesday, Oct. 1 at La Playa Stadium.