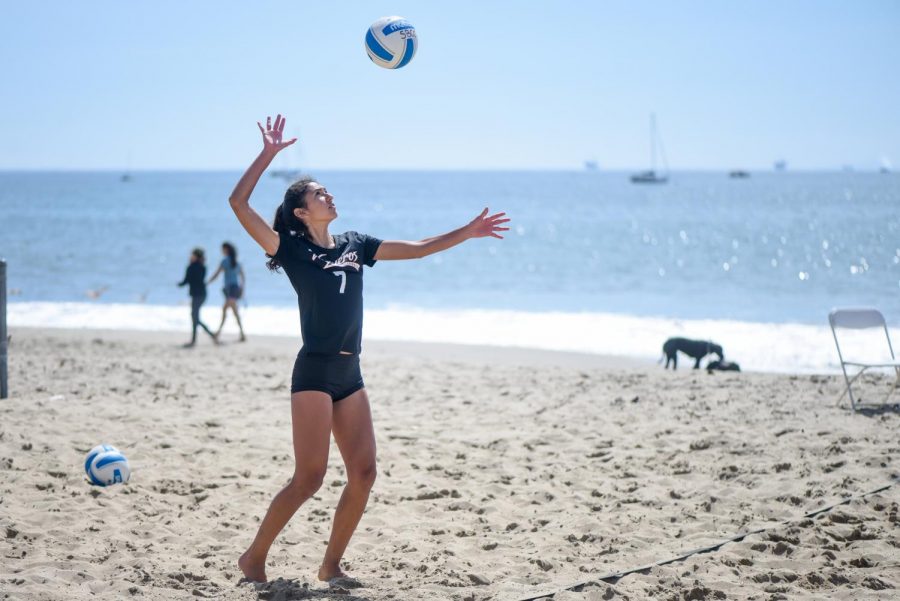 Jacque Ortegon serves the ball at a beach volleyball game on March 21, 2019, at East Beach in Santa Barbara, Calif.

A psychology major from Coronado, California, Ortegon has been playing volleyball since she was in seventh grade.

Her first experience came from a middle school summer camp.

“My mom just signed me up,” she said. “From there I fell in love with the sport.”

Because this is the first year that City College’s beach volleyball team has been categorized as a sport instead of a club, many of the team’s players are still new to the beach version of their sport.

Coach Samantha Calisto said there is a steep learning curve for anyone taking up the beach version of the sport for the first time.

“It’s a completely different sport,” Calisto said. “The idea of how to serve, pass, and set is totally different.”

She also said that it takes time to adjust to the wind factor, which is not present in the indoor version of the sport.

Despite the challenges of the transition, Calisto said that she can see Ortegon and the other players improve quickly as they adapted to the new concepts.

“She is extremely athletic and she has a very consistently cool under pressure vibe,” Calisto said.

Calisto said that the biggest improvement she’s seen from Ortegon is in her play at the net. She said that even though Ortegon has always been one of the best jumpers on the team she “wasn’t much of a hitter,” but as the season has progressed she has become more aggressive.

“She’s good at what she does, but she doesn’t rub it in other people’s faces,” she said. “She always stays humble.”

Meyer added that Ortegon is a “smart player” who has a talent for placing the ball in the right spot.

Ortegon said that she hopes to get a scholarship to keep playing volleyball at a four-year university after her time at City College.

In a sport where many Division One college players stand at over six feet tall, Ford made up for her lack of height with her jumping ability on her way to Pac-12 All-Freshman Team honors in her first year.

Ortegon said that she hopes to follow Ford’s example and succeed using her own athleticism.

Although she has played court volleyball longer, Ortegon said that she prefers playing on the beach.

She said that playing in the sand and battling the wind makes her push herself to jump even higher and compete even harder.

“I really feel like it makes me better,” she said.