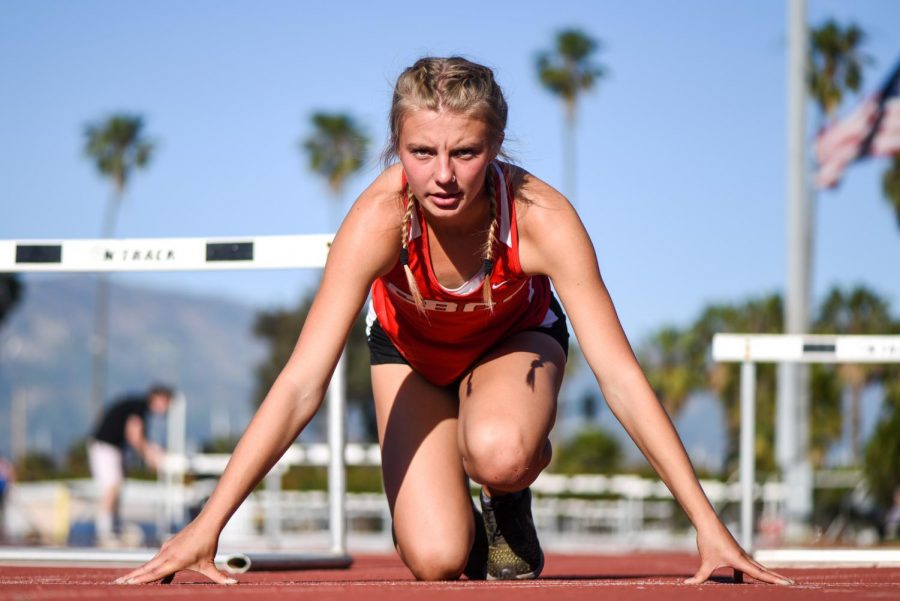 Caroline Smith kneels down, how she would before a race, on Friday, April 12, 2019 at La Playa Stadium at City College in Santa Barbara, Calif.

Smith hails from Santa Cruz California and attended Scotts Valley High School from 2014-2018.  She considered running on a division one level at University of San Francisco and had a wide array of division two schools to choose from, but elected to run at City College instead.

“I wanted to go to a community college to find better options for transfer,” Smith said.

Like many others, the location of the school and the UC transfer program was very appealing to Smith.

Eventually Smith plans to transfer to a division one program and UCSB reigns supreme in Smith’s head, calling it her “dream school.”

Smith is balancing a 13.5 unit schedule with her running this semester. She wants to major in sociology and work in counseling and therapy.

“I feel like I know what to say when people come to me seeking advice,” Smith said. “I enjoy being able to help people.”

Smith began running in middle school and realized that it’s what she “always wanted to do.”

She grew up running in the redwoods of her state-park-backyard Henry Cowell, located in the Santa Cruz Mountains. Because of this, she prefers to run sprints for school athletics.

“I really love running in the forest, I didn’t want to ruin it though,” she said.

In high school Smith trained with the assistant coach of Soquel High, a high school out of her district. She credits the intensity of her workouts as what ultimately made her a better runner.

She added that the coaches at Scotts Valley high school were a little more laid back so she “had to be independent when it came down to coaching.”

This year she praises her coaching staff, who are “always present and giving advice.”

“She’s a blessing,” Head Coach Scott Santella said. “She’s everything you could want in a player.”

Santella said when Smith came to the program in the fall the coaching staff knew right away she was going to be great. “She’s here everyday, and always ready to go,” he said.

Smith has also formed great relationships with her teammates this year.

“I’ve gotten really close to my teammates,” Smith said. “They have been the highlight of my season.”

“She keeps everyone in check, especially me,” Teammate Isabella Molony said. “Whenever I have a bad race day she always knows how to pick me up.”

Molony said over the season the two of them have created a special bond, adding “she means a lot to me as a friend, on and off the field.”

At the Easter Open on April 12, Smith set a season record of 12.83 seconds in the 100 meter dash, breaking 13 seconds for the first time this season.

She also placed third in the 200 meter dash, and her 4×4 team, whom she refers to as “my women,” placed first.

Smith and the track team will be competing in the Track and Field Western State Conference Preliminaries held at 11 a.m. Friday at La Playa Stadium.

With her team backing her, and home field advantage, nothing stands in her way.