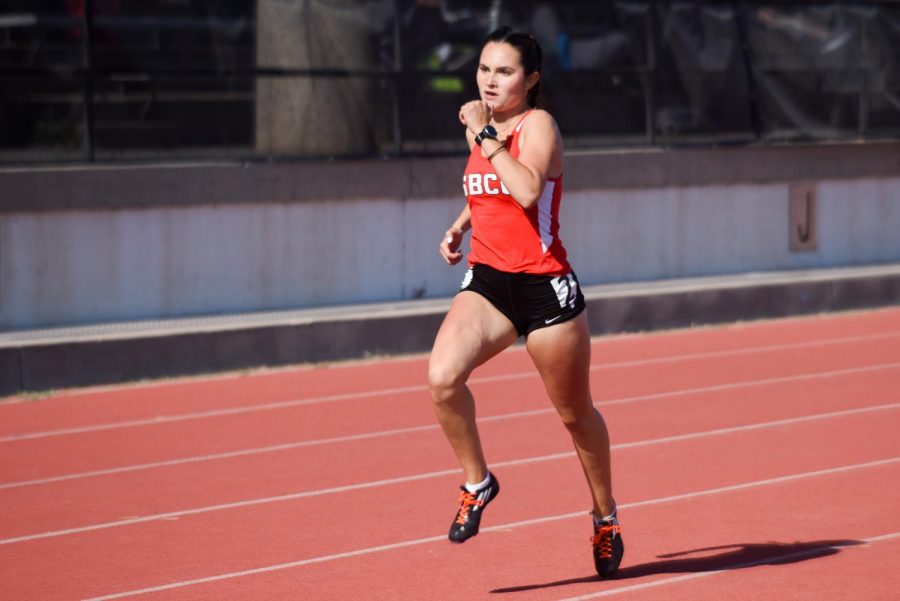 Christy Chavira runs in the 1500 meter race during the Easter Open on Friday, April 12, 2019, at La Playa Stadium at City College in Santa Barbara, Calif. Chavira placed second in this race.

This was the Vaqueros first home meet of the season.

“We feel comfortable at home and don’t have to worry about how the track feels like or how hard the sand pit is,” head coach Scott Santella commented about home field advantage. “We get to focus all our energy on competing at a high level.”

Thirty-nine different events were held in the stadium from 3 p.m. until last event at 8:30 p.m.

Vaquero sprinter Shoelle Bruhin placed first in the Women’s 400 meter dash with a formidable lead of 6 seconds and a time of 58.9 seconds.

“It was really difficult because of the wind,” Bruhin said. “It felt great even though it wasn’t a P.R.”

City College finished second for the women’s’ heat and third for the men’s’ heat in the 4×100 meter relay.

Sophomore middle distance runner Christy Chavira placed second in the 1500 meter race with a time of 5:07.75.

Recovering from a hamstring injury two weeks ago, sprinter Caroline Smith competed in the women’s 100 meter dash the second time this season and placed third out of 16 runners in her heat with a time of 12.83 with legal wind.

“She’s always ready to go, and running under 13 seconds is a great time,” Santella said about Smith.

Freshmen sprinters Nicolas Murillo-Perez and Nathan Brooks placed fifth and sixth in the men’s 100 meter dash out of 27 contestants.

“I wasn’t expecting much,”Murillo-Perez said. “This was my first time running the 100m with a back injury, and it was not too bad.”

“I’ve been trusting my coaches and trusting the process,” Brooks said, who was coming off of a quadricep injury.

With only a tenth of a second of a lead, Vaquero Sean Fitzgerald crossed the finish line first in the men’s 400 meter hurdles with a time of 57.81 seconds. This was Fitzgeralds first time running hurdles for City College.

Sophomore jumper Brian Nnoli of City College captured first place in the triple jump with 14.42 meters. This was Nnoli’s best jump of the season and he nearly reached his state championship mark from last season.

“There were some great performances and as a whole, our team did very well,” Scott Santella said. “We are right where we want to be moving into our conference championships next week.”

The Western State Conference Preliminaries will be held at 11 a.m. Friday at La Playa Stadium. This will be the second and final home meet of the season.