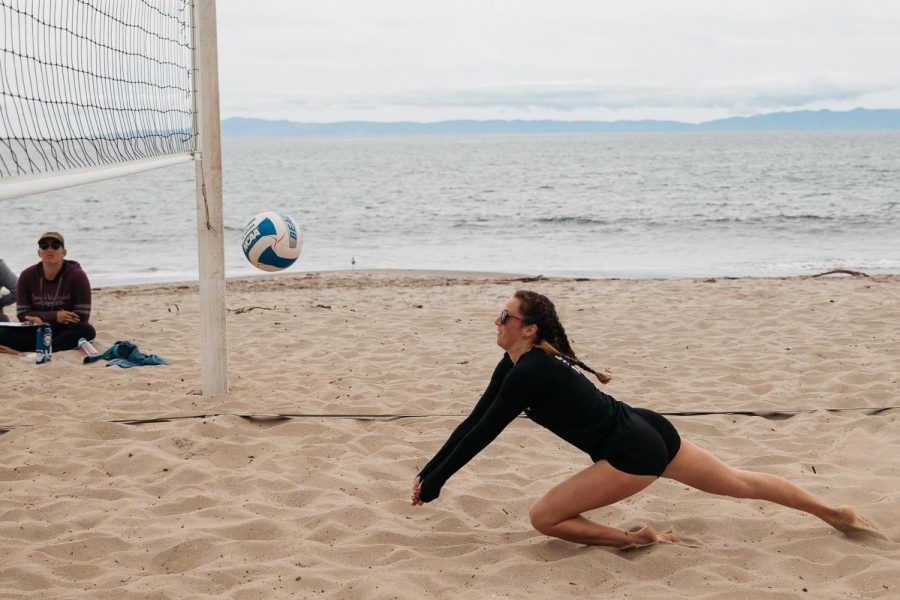 Emma Esparza dives for the ball on Friday, April 5, 2019, at East Beach in Santa Barbara, Calif.

The City College beach volleyball team won its last home game of the season on the back end of a back-to-back Friday morning at East Beach.

The first game was lost 4-1 to Moorpark, and the second was won over Victor Valley 5-0.

The first-year beach volleyball team has shown steady improvement and it was showcased in its first home win.

“Everyone has great chemistry now,” head coach Samantha Calisto said. After mixing up the duos all season, Calisto is now satisfied with how her team is working together.

“Our top teams are really competing well, it was great for everyone.”

City College duo McKenzie Garrison and Grace Trocki were the only duo able to capture a win in both games. Garrison and Trocki were communicating very well together, calling out every move and filling the empty space.

The first game they played was a battle, and the highlight of the day for the team.

“They started the season together and now they are back,” Calisto said about the duo. “They are more encouraging and working well together now.”

“It was hard finding the balance of what we needed out of each other.” Trocki said. “Winning together felt good, and winning while having to deal with the wind felt great.”

It was particularly windy for a City College team not used to those conditions.

“The key to our success was our consistency in an unfriendly environment,” Calisto said.

The City College one team consisting of Jacque Ortegon and Emma Esparza lost its first match to Moorpark, failing to find a rhythm.

“We lost our basic fundamentals and got too confident,” Ortegon said. “The one thing we’ve been really working on is getting out of our heads.”

This was the first home match the duo played together, but according to Esparza they have been

“playing together at practice and away.”

The duo was able to redeem themselves with a dominant blowout on the Victor Valley one team. The duo won 21-9 and 21-14.

“It was way more relaxed, but we focused on staying efficient,” Ortegon said.

“It felt good, not gonna lie,” Meyer said laughing after the match.

This was the last home game of the season for the Vaqueros but they still have a few games left.

You can find their full schedule here.