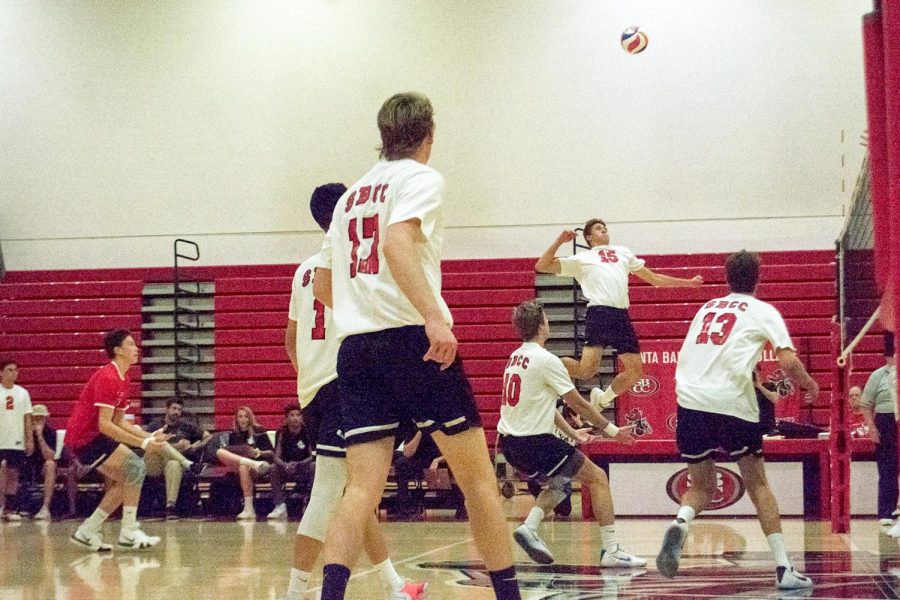 Outside hitter Trent Lingruen, (No.15), jumps to attack a set during the second game of the Vaquero’s match against Orange Coast on March 16, 2019 in the Sports Pavillion Gym at City College in Santa Barbara, Calif. The Vaqueros lost the match in 5 sets.

The Vaqueros were put to the test in the Sports Pavilion as they went against the highest ranking team in the league.

The Pirates had the upper hand in the first at 25-23 and second at 25-19, but the Vaqueros kept the game tight.

Freshman Calvin Sanborn continued his powerful kill streak with 22 kills, helping earn them their wins in the third and fourth sets.

“It was a super fun night,” said wing spiker Sanborn. “When I was struggling in the second set, my teammates stepped up to help gain momentum.”

The crowd got tense towards the end the third set, as the Pirates and Vaqueros were neck and neck at 23-23, but Austin Lind blocked for another point for the Vaqueros. Eventually, Trent Lingruen delivered a powerful serve that fouled on the Orange Coast side, winning 30-28.

Freshman Trent Lingruen served 17 kills and three powerful serve aces, including one that helped gain them a four point lead in the fourth set.

“We started off slow,” said Lingruen, a left side wing spiker. “Tonight we saw a glimpse, we saw the potential throughout the game. We need to be more consistent.”

Associate Head Coach Cullen Irons emphasized that this was a “fun to watch” game.

“Travis has been doing this forever, Jon is new and doing a great job,” Irons said. “The Vaqueros are high and hard going up against blocks, they have a fast offense.”

At the start of the fifth set, the crowd began chanting “SBCC” as the energy grew more intense. At that point, the Pirates won two sets and the Vaqueros won two sets, but because the Pirates started out with a significant point gap, they won 15-9.

“While it is always tough to walk away, to play the number one team in the league and lose two to them and win two to them– that in my book is a win,” said head coach Jon Newton.

Following the intense game, soon-to-retire Ed Gover was honored for his 28 years of coaching the women’s volleyball team. Athletics Director Rocco Constantino gave him a plaque to honor his years as a coach. Gover compiled a 378-216 record with eight Western State Conference wins.

“He is always working to make people around happier and better,” Newton said about Gover.

Gover will continue to teach physical education at Santa Barbara Junior High, which he expects to do for about another four years. He said he wants to teach through the current construction and be able to have one year in the new Physical Education building there. He will also continue to teach club volleyball because he said 13 is a “great age for fundamentals,” and he enjoys coaching that age group. He also added that brand new coaches typically coach the younger ages, but he believes they could benefit more from a seasoned coach at that age.

In lieu of admission tonight, the audience was asked for donations to Coaches vs. Cancer, a charity that’s special to Gover. It works together with the American Cancer Society in improving and saving lives from cancer.

The next home game for the men’s volleyball team is against Moorpark in the Sport Pavilion on March 22 at 6 p.m.