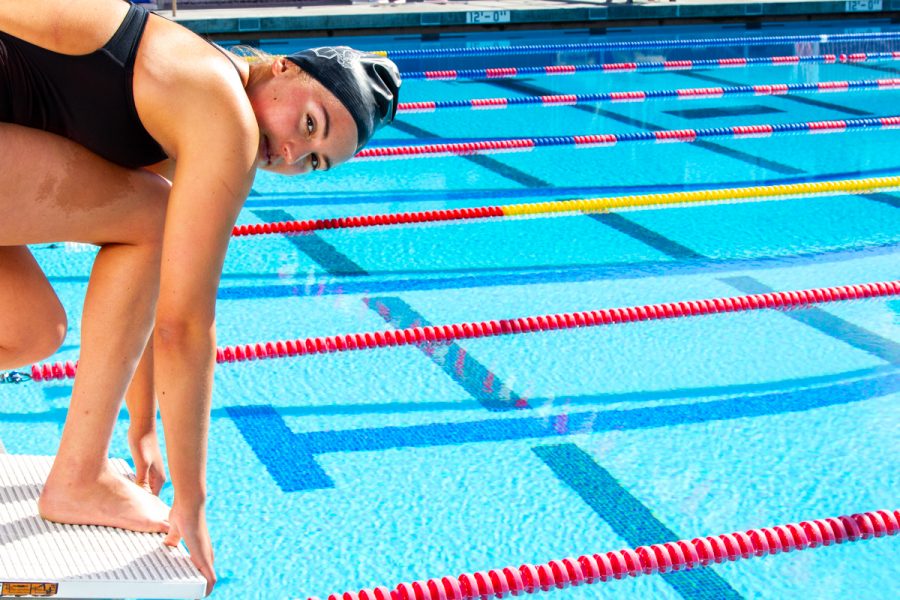 City College student Melisa Walk poses for a portrait on Thursday, Feb. 21, 2019, at the San Marcos High School pool in Santa Barbara, Calif. This is Walk's second year with the swim team.

A 3.8 GPA and a 16-unit workload this semester doesn’t faze Melisa Walk, who remains undefeated in her two years as a water polo player at City College.

Walk has 18 combined wins and zero losses in water polo between her freshman and sophomore year at City College. In the water polo offseason, she competes in the 100 and 200 breaststroke and the 200 freestyle.

Coach Brian “Chuckie” Roth describes her as “one of the best athletes at the school.”

“It’s not just about the wins and losses of an athlete,” Roth said. “It’s about your dedication, loyalty, bettering yourself, someone who perseveres, wants to make personal improvements, and finds the balance to make it work.”

Towards the end of meets, Walk can be seen cleaning up kickboards and canopies.

“She has the positive leadership mentality,” said Jill Lin, volunteer assistant coach. “She works hard, wants to get better, and sets a positive example.”

She is also an environmental economics major and is currently taking 16 units this semester, with the second highest on the team.

Walk was born and raised in Ventura and grew up playing competitive sports. She played soccer in elementary school, swam in middle school and picked up water polo her freshman year of highschool.

During water polo season the team competes in two games every Friday and two games every Saturday, sleeping in hotels and getting back late Saturday night. They have Sundays off, but Mondays are right back to practice.

“Swim season is a little more lax thankfully,” Walk said, though she still practices daily and competes in meets frequently.

Walk said getting in the pool and practicing everyday helps keep her grounded, using her time in the water to reflect on her movements through the water.

“After you finish a workout, you’re not regretting the time that you’ve spent. You always feel more energized, you feel better than what you came in to. It’s therapeutic.”

One of her greatest successes was winning the Western State Conference Championships last year, although she had been questioning why she was competing there since she was a water polo player, not a swimmer.

Walk is now a fourth semester captain, which Roth calls a “testament to how people value and respect her.”

“When you are doing things right, people notice that,” he said.

Emily Reilly, a freshman on the swimming team, said she enjoys watching Walk during her competitions. Reilly praised Walk for never being “cocky,” but always “humble.”

Reilly said that when their Coach is pushing them hard, it’s nice to also hear the positivity coming out of Walk.

“She is a silent leader, she does everything right, but doesnt always win,” said Roth. “She is an example of what this team should be and is — people bettering themselves in life.”

The next home meet for the team is 10 a.m. on March 29 at Santa Barbara High.