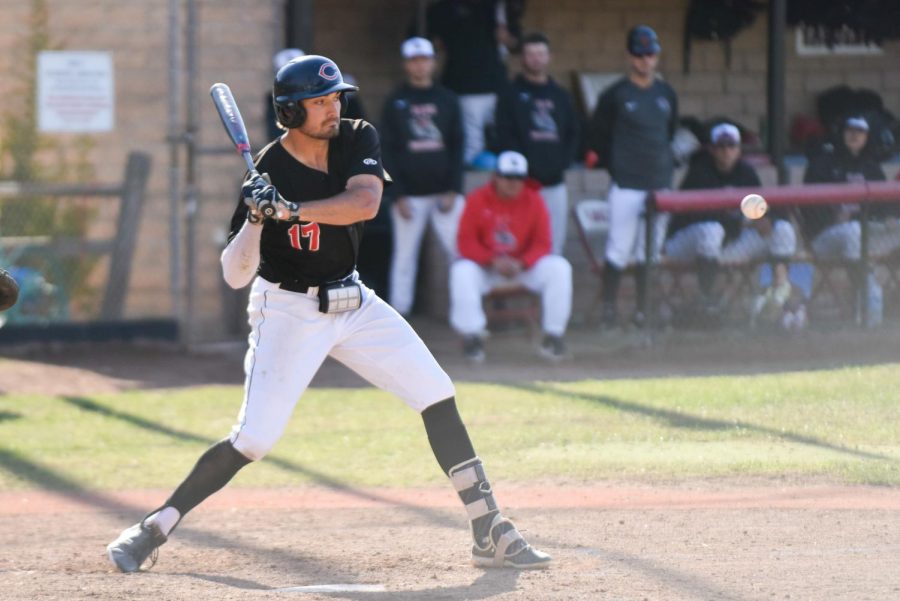 The City College Baseball team’s late comeback bid fell short Saturday in an 11-8 defeat against Chaffey College in the first game of a double-header at Pershing Park.

The team got off to a slow start, with Chaffey building a 6-1 lead largely due to unforced errors.

The team made a valiant comeback in the fourth, sparked by a two-run double by second baseman Tommy Holguin that almost cleared the center field fence. However, the five-run inning did not provide enough momentum to complete a comeback.

Balls getting past the catcher, missed throws and dropped balls were largely responsible for the deficit that the Vaqueros faced. Only four of the visiting team’s 11 runs were considered earned.

Although he was not responsible for most of the scored runs, starting pitcher Jack Aldrich only made it through four innings before Tristan Perrin relieved him.

Chaffey got off to an early lead with three runs in the top of the first inning. Two of the runs came on an error, and the third was scored on a wild pitch.

A deep third inning home run by Chaffey first baseman Darren Taylor made the score 6-1 before the Vaqueros fourth inning run that tied the game.

The visitors added five more runs over the final five innings, capitalizing on scoring opportunities by moving runners with well-timed bunts and steals.

The Vaqueros entered the bottom of the ninth inning trailing 11-6, having failed to muster any scoring since the fourth, before scoring two on a series of hits that were too little too late.

Perrin was credited with the loss after giving up the runs that broke the tie in the fifth.

Catcher Benjamin Martz, who had two hits in four at bats but also committed two fielding errors, pointed to the ninth as an issue.

“We needed to come into the ninth inning with more energy,” he said after the game. “We needed to just keep playing baseball.”

Head coach Jeff Walker had a different response on what needed to change going into the second game against Chaffey.

“We could have won that game 6-0 if we had taken better care of the baseball,” Walker said.

He said that his team did a good job coming back after facing an early deficit, but they hurt themselves too much with the errors.

He also said that it hurt to go into the second game of a double header having used three pitchers, and that he was hoping his starter could go at least six innings.

The loss dropped SBCC to 5-4 on the season, good for second place in the Western State Conference North Division.

The Vaqueros play their next game at home against Orange Coast on Wednesday at 2 p.m. The schedule can be found on the team’s website.