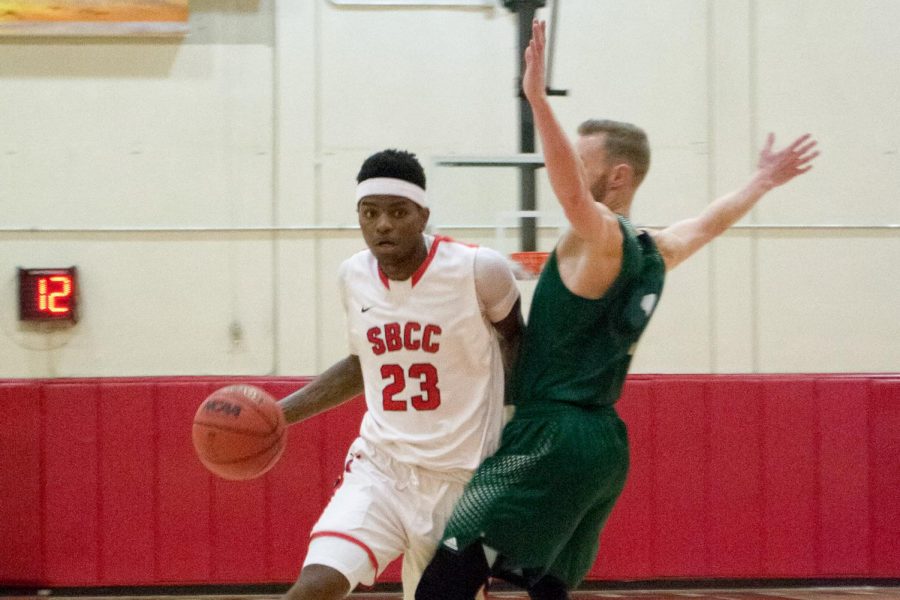 Zeke McMurtry (No. 23) charges past a Cuesta defender, Joshua Wilson-Murry late in the second half of the game on Feb. 16, 2019, at City College in Santa Barbara, Calif. The Vaqueros lost the game 76-57.

The City College Men’s Basketball team lost 76-57 to Cuesta College Saturday with a major disadvantage of only one bench player—but they didn’t go down without a fight.

This was the team’s twelfth consecutive loss. They are now 3-22 and have won a combined nine games in the last three seasons.

The team had just one bench player compared to Cuesta’s nine because of an ACL tear earlier this week and another player now in concussion protocol.

The first half of the game was competitive and close. The Vaqueros had enough energy and speed to keep the game a battle.

Zeke McMurtry lead the team with 18 points, on 9-22 shooting from the field.

City College looked fearsome on defense in the first half, but Cuesta’s Jorge Bueno kept them in the game by knocking down tough fadeaway threes and contested mid-range jumpers.

Bueno tallied 18 points on 7-12 shooting from the field.

There were multiple lead changes in the first half, with both teams struggling to come out on top.

At the end of the first half it was only a one point game, with City College trailing 31-32, but the second half couldn’t come fast enough for them as they were already out of gas with 15 minutes left in the game.

Cuesta increased their lead by 8 points and head coach Morris Hodges was forced to call a timeout.

After this, Cuesta’s lead ballooned to 20 points with seven minutes remaining, and the Vaqueros were trapped in a hole.

The team was gassed, and because of that, emotions erupted. City College players Jashon Lee and Zeke McMurtry got into a verbal scuffle, but it was quickly distinguished by the coaches.

“No question there was a depth factor,” Hodges said about the loss. “The problem is we’ve had four season ending injuries.”

With only nine players to start the season, four injuries have totaled the team leaving them struggling to win a single game.

“Losing Drake was a huge factor,” Hodges said about guard Drake Sueda who has been sidelined for the season. “He was our starting point guard who was our best player at getting to the line.”

“It all comes down to competitiveness,” Vaquero forward Taylor Burns said after acknowledging the lack of depth. “If we had moved the ball more in the second half we could’ve kept the game close.”

The Vaqueros play their last home game of the season against Allan Hancock 5 p.m. Tuesday Feb. 19 at City College.

Their last game of the season follows at 3 p.m. Saturday Feb. 22 at Oxnard.