SBCC Women’s Soccer wins in first round of SoCal Regionals 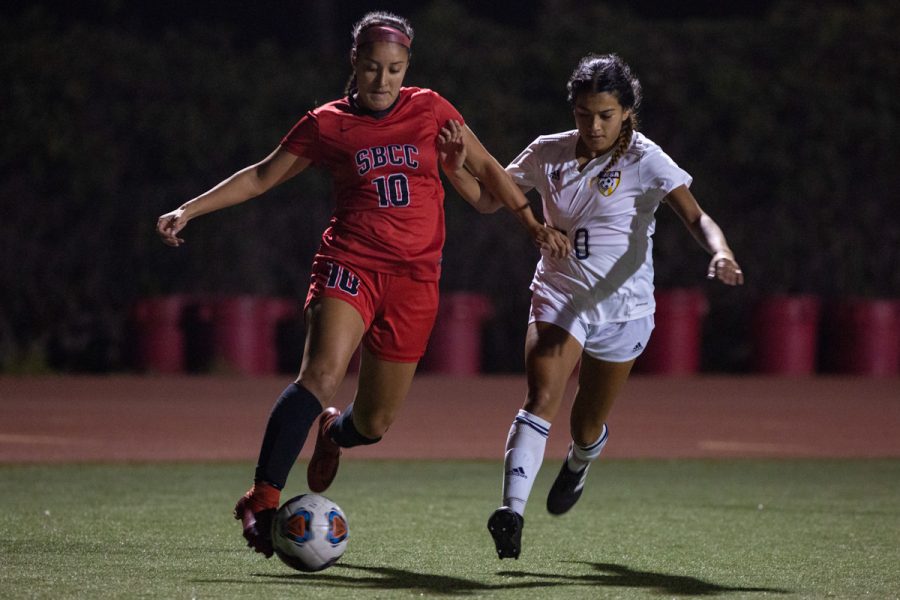 Lady Vaqueros Lourdes Marin-Rodriguez (No. 10) drives the ball through the Mesa’s defense during the first playoff game on Saturday Nov. 17, at La Playa Stadium at City College, Santa Barbara, Calif. City College went on to win, 3-1.

The Vaqueros didn’t score until 55 minutes in when Isabella Viana (11) dribbled through the defense and touched the ball right into the corner of the goal. This sent the players into a big huddle filed with hugs while the crowd leapt to their feet to applaud and the men’s soccer team cheered.

“I’m really proud of the team for coming together and working and putting everything they had on the field,” Viana said. “We fought till the end.”

She added that the outstanding teamwork made her proud to work with the players on the team.

The Vaqueros kept up the hard work throughout the game by constantly making runs up the field to cross and shoot, but the Olympians were always right on top of them.

The ball was in the Vaqueros’ possession for the majority of the game while the Olympians used their defense to try and prevent the Vaqueros from advancing to the next round of regionals.

The first half of the game was quick and clean with no fouls and no goals while Santa Barbara outshot the Olympians.

The San Diego goalie dove through the air at the 42 minute to make a memorable save, making the Olympians go crazy on the sidelines.

Seventy minutes in Riley Moore (7) was injured during a play and needed to be helped off the field while Ashlee Schouten (12) took her place.

The Vaqueros held their ground strong until 74 minutes in when the Olympians scored, sending off screams from the players and a lot of anticipation to score another goal before the time ran out.

Shortly after this, tensions raised and the teams pushed harder to stay in the completion until the next round.

In the last two minutes of the game the Vaqueros attempted shot after shot, hoping one would make it in, without success. The teams went into two overtimes of half an hour each trying to make a goal.

The Vaqueros scored a goal in the last minute of the first overtime but it wasn’t counted due to being offsides.

“My back was towards the goal and I just headed it back hoping it would go in,” Sickle said.

With this win, the Vaqueros advance to third in the SoCal regionals.

“Thought we played well and dominated the game. Anything can happen in these games,” said head coach John Sisterson.

“We battled hard and scored our goals and got the outcome I thought we deserved,” Sickle added.

The next playoff game is Tuesday night, which will see the Vaqueros face off against either Fullerton or Santa Monica depending on the outcome of their games.