SBCC soccer bounces back with 3-0 win against Allan Hancock 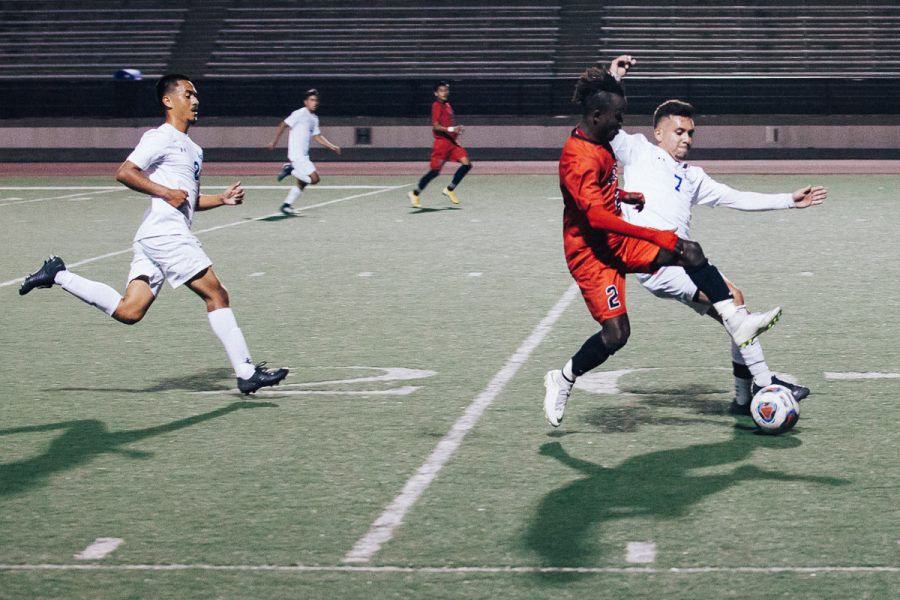 City College’s men’s soccer team broke its three game losing streak with a 3-0 win against the Bulldogs from Allan Hancock.

After not making a goal for multiple games in a row, the Vaqueros came to La Playa stadium this Tuesday pumped and ready to win in front of a crowd full of mostly Bulldog fans.

The team decided to change its strategy and have a different front three than in the past games, in hopes that this chance would result in a better outcome.

The Bulldogs managed to hold their ground until the 33 minute mark when sophomore Ameyawu Muntari (2) used his quick footwork to dribble around Hancock and put the ball in the back of the net.

That caused the team to go running to form a big jumping huddle full of smiles. Standing at 5’4, Muntari celebrated his goal with a quick high-five from his teammates and a wave to the cheering stands.

“We had a pretty unforgiving season last year,” Muntari said. “But were starting to get to know each other finally.”

Muntari said he always knew the goals would come and that it was just a matter of the team working together.

Only 30 minutes later, Muntari kicked a corner and sophomore Oscar Drevland (14) put the ball in the top right corner of the net, scoring his first goal of the season and boosting the team’s confidence in themselves. The team started to get pumped and push themselves which led Muntari to score another goal barely two minutes later and show off with a celebratory flip after.

Head coach John Sisterson fist pumped the air with a huge smile on his face while calling out some of the starters to give them a break.

“It feels good to finally get a goal,”Sisterson said. “We apple to them before the game and told them they’d be creating a lot of chances, we just need to put some in the back of the net. Those were some good goals and we could have had a few more.”

The Bulldogs took a beating from the Vaqueros fairly quickly when the visiting team’s midfielder, Jose Sanchez (11), took a hard hit within the first five minutes and went down. He was out the rest of the game to recover while freshman Juan Marcos Pinon (4) took his place.

The boys played a clean game aside from two yellow cards give to Hancock player Juan Rios in the 45 minute and goalie Antony Herrera at 81:30 when Herrera ran into a Vaquero player knocking him over hard.

The Vaqueros will face their next opponent at 4 p.m., Oct 12, at Oxnard City College.