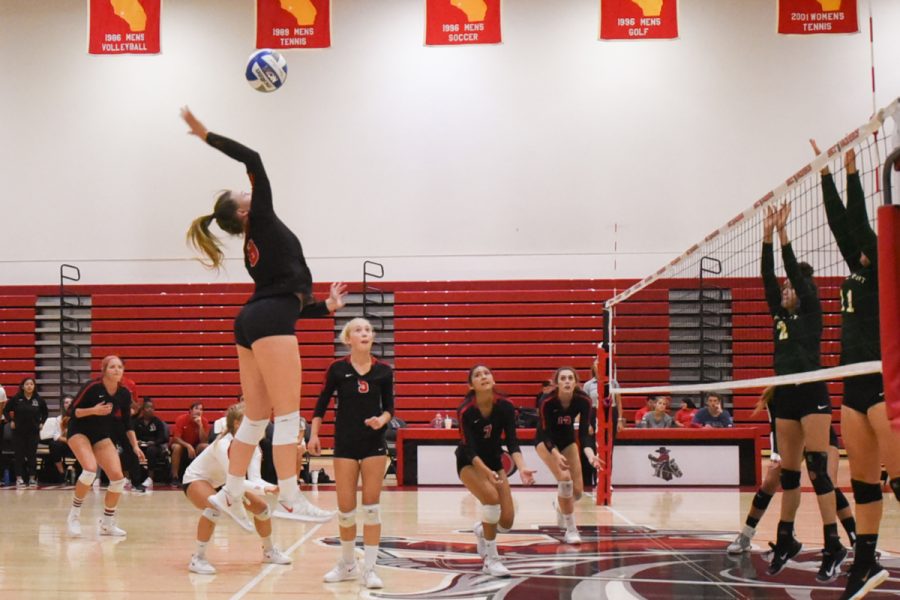 Kate Willingham (No. 8) spikes the ball against Grossmont Community College at the Sports Pavilion gym at City College on Saturday, Sept. 22.

This match is a definitive one, as the team inches closer to conference and playoffs later in the semester.

The Lady Vaqueros entered the match with confidence, as they earned their first victory on their home court, the Sports Pavilion Gym, this previous Saturday against Contra Costa college.

The opposing team’s chants and distracting calls were not enough to throw the Vaqueros off their game, as they lined up at the net.

Grossmont College kept the team on their toes with their quick footwork and strong passing. While Grossmont swiftly won the first set, they did not win without a challenge.

The ladies of the team were able to maintain clear communication on the court and on the sidelines, despite two time-outs and the faster pace of this particular match. Following each play, team members briefly huddled up to regroup and give encouraging words, seen by the grins across their faces as they spoke with each other.

After losing the first set 25-15, the girls continued to stay motivated despite their obstacles.

Freshman outside hitter Kenzie Garrison highlighted how the team perseveres throughout challenging matches such as this one.

“I think the most exciting part was definitely our defense. Our defense picked up this game, especially blocking on the outside,” Garrison said, “We want to be more disciplined on our passing and our server. It’s the first contact of the match, we have to make sure those are good.”

Garrison and her teammates played even harder the second set even when disagreements occurred such as one quick incident where the down referee misjudged and mistakenly called out the Vaqueros for touching the antenna and going out of bounds. The situation was promptly cleared up after backlash from the coaches.

Coming back from a 25-19 defeat, the women’s volleyball team tapped into another mindset, and implemented strong blocking at the net. The frustration served as fuel, evident when Sophomore middle blockers Kate Richardson and Grace Trocki, with the assistance of Freshman right side hitter Jacque Ortegon consistently blocked the ball from crossing the net multiple times in a row, as if they were a brick wall.

The bleachers were on the edges of their seat the entirety of the third set. The teams remained neck and neck, neither one holding more than a two point lead at any given time.

The crowd was just as active as the players, who hustled up and down the court in an attempt to win over a fourth set.

“I thought we did a lot better the third set, I thought Katie Garrison found her rhythm. She kind of became unstoppable for a little bit, which was nice to see. So that was the highlight of the day,” assistant coach Jon Newton said, “She’s one of our more dynamic players.”

Despite losing a close set 27-25, the ladies of the team held their heads high knowing they played with vigor.

“For the season, I think it’d be awesome if we started the season as strong as we are now, cause then we can progress even faster,” Garrison added, “But, we are progressing and getting stronger everyday.”