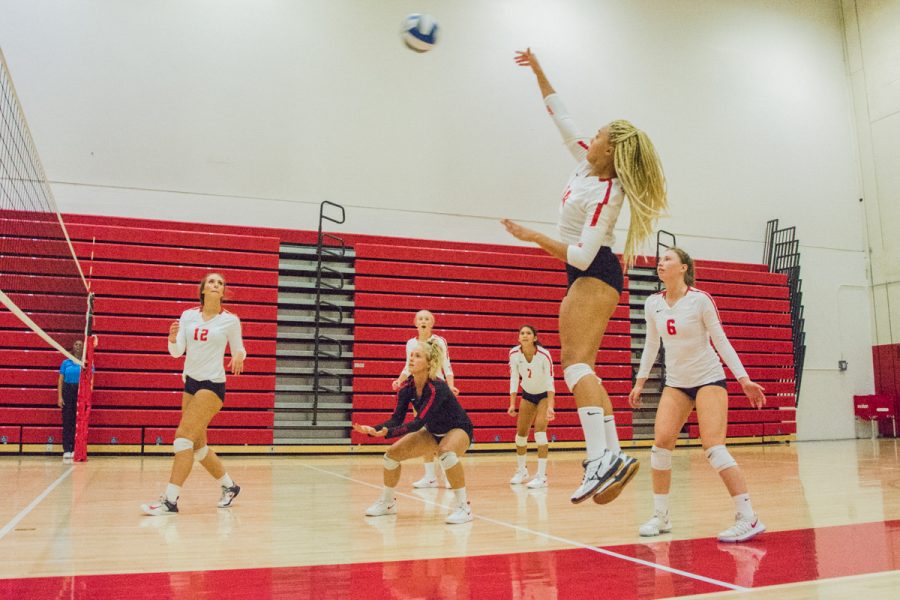 City College opposite hitter, Jazz Hill (No. 14), hits the ball at the Sports Pavilion Gym in Santa Barbara, Calif., on Saturday, Sept. 15, 2018 Hill helped the Vaqueros score in their 25-6 set win.

After a physically demanding match, the Lady Vaqueros came together in a huddle to give each other words of support, like they usually do. The only difference this time was the narrative.

Santa Barbara City College’s women’s volleyball team blew Cerritos College out of the water Saturday morning with a 3-1 victory. This win is a memorable one, as it is the first win this season on their own turf.

The girls dominated the match, and they were notably more aggressive than their performance during the previous match against Pasadena.

“We’re all good passers but we just weren’t applying ourselves and the volleyballs were flying everywhere. We were able to get the first contact under control,” she said.

The team came back stronger and smarter, preparing for this particular match with excessive drills to build team dynamics and improve their technicalities, with the main focus being the first pass.

“It’s our first win, so it feels good,”  Michaelson said. “That’s what we told ourselves we were going to do and we did it. I’m very confident we’ll win the next match, too, and everything following into conference.”

The Vaqueros gave Cerritos College a run for its money, setting the tone for the first set at 25-14. Although Cerritos won the second set with a 5 point lead, it wasn’t enough to hold the team back.

They appeared to feed off of the crowd’s energy to keep their adrenaline going while they stared across the net at their opponents. The aggressive physical nature of the match kept the large crowd of families and friends at the edge of their seats.

The team definitely gave the crowd something to cheer for. Sophomore outside hitter, Kenzie Garrison, stood out for her hands on approach, earning four spikes and seven kills.

In its following match against Contra Costa College, the women’s volleyball team fought even harder, blowing Contra Costa out 3-0. The team took their previous win as motivation, or perhaps a guideline on how to approach their next opponent.