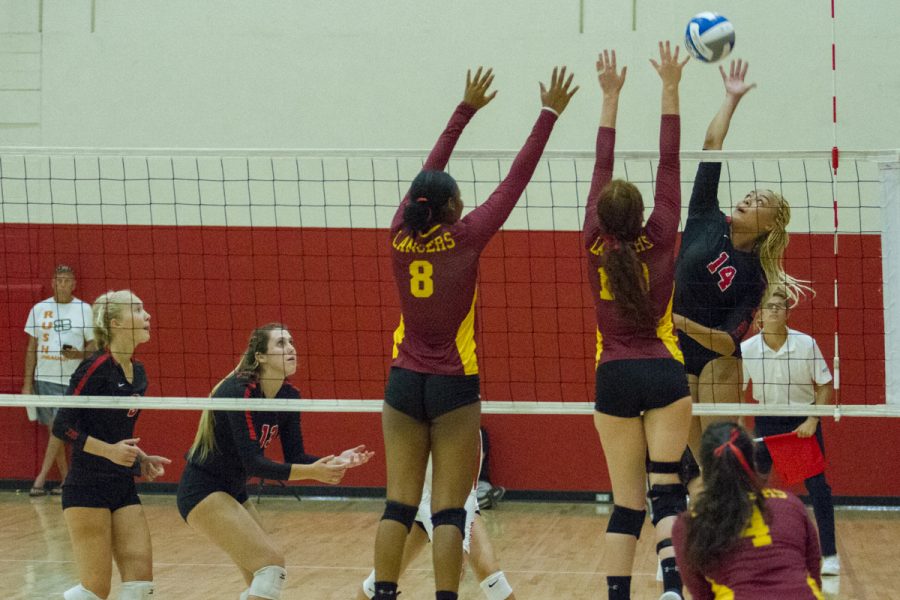 City College outside hitter Jazz Hill (No. 14) attempts a spike against Pasadena City College middle blockers Jada O’Mally (left, No. 8) and Rachel Johnson (No. 16) at the Sports Pavilion gym at City College in Santa Barbara, Calif., on Saturday, Sept. 8, 2018.

After an intense match against Pasadena City College Saturday, the City College Women’s volleyball team learned that the only way to become a champion team is to learn from past mistakes.

Jazz Hill, Sophomore outside hitter said that the team’s 3-2 loss served as instruction for where the group can improve.

Hill, Freshman setter Danielle Hewitt, and Freshman right side hitter Jacque Ortegon kept high spirits among the matches as they fed off of the crowd’s high energy and the coach’s enthusiasm on the home court opposite their opponents.

Hill credits the team’s steady composure to its members’ chemistry and optimism going into their next match against Long Beach City.

“I’m pretty close with everyone considering the short time frame I’ve been on the team. Everyone is really, really great and really supportive despite our downfalls,” she said.

Hill, originally from Calabasas and a transfer from Catholic University in Washington, D.C., said communication is a huge factor in the success of the team.

“The East Conference was completely different but I mean it’s like I said, the girls on my team are extremely competitive, everyone’s reaching for the same goal,” she said. “The people who were on the team last year made a really big point of that this year because the communication hasn’t been the same, so we are trying to focus on communication and getting everybody together and on the same pace.”

City College played a close match, starting strong with a seven point lead in the first set. Although Pasadena City claimed the second set with six point lead in return.

City College alumnus and now assistant coach, John Newton, explained the components the team can adjust to prepare for their next match.

“We’re increasing our serving and we’re gonna make some adjustments while passing so we can clean that up,” he said. “We’re focusing on our close contact.”

Although there is room for improvement, the Vaqueros didn’t go down without a fight. After losing the previous match by six points, City College pulled through with a four point lead.

The players were visibly determined as they focused down the court, almost completely tuning out the exclamations from the crowd. They fought tooth and nail with Vaquero defensive specialist Emma Esparza taking a rough plunge towards the ball, missing by merely inches.

This play set the tone for the rest of the fourth match, as they left the match with a 3-2 loss but were still in high spirits.

The team will play its next two matches at 11 a.m and 3 p.m. Saturday, Sept. 15 at home against Cerritos College and Contra Costa College, respectively.