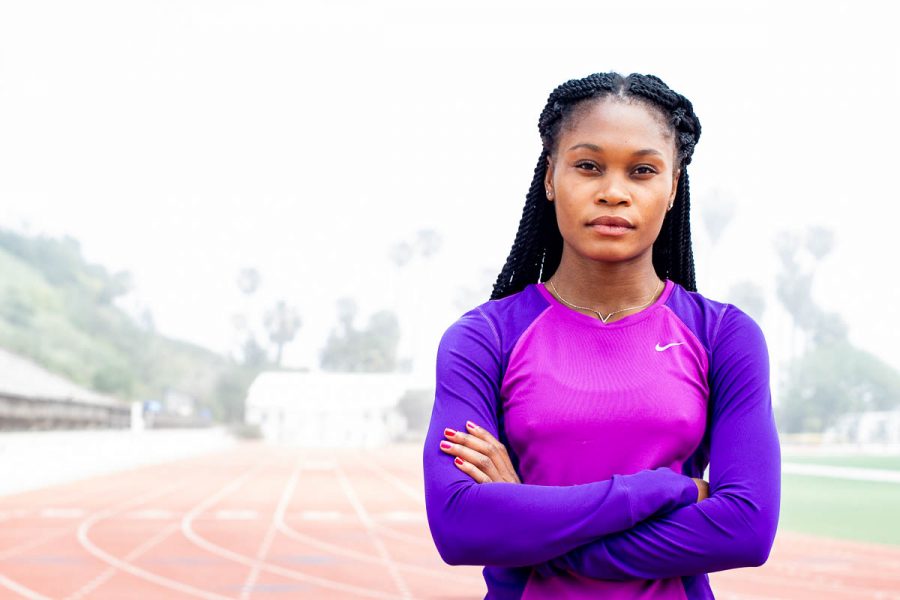 Vaquero Marie Kimumba on Tuesday, May 8, at Santa Barbara City College's La Playa Stadium. Kimumba is a sprinter and hurdler for the Vaqueros who is competing for the first time this year.

Freshman track sprinter Marie Kimumba dominated the competition in her debuting season as a Vaquero, with her most recent victory in the 400-meter sprint at this year’s WSC Track and Field Championship.

“Running is literally everything in my life” Kimumba said. “Track has always been something that I wanted to do competitively. Watching all those runners… I wanted to be like them.”

Kimumba ran the second fastest 200m sprint time in City College’s history this season, only three-hundredths of a second behind the number one spot.

She grew up in Stockholm, Sweden, and the way she describes her training back home is not what one would expect, considering the times she has been putting down.

“I wasn’t ever part of a running club or team back home,” Kimumba said. “I basically did all the training on my own.”

According to teammate Isabella Molony, Kimumba’s relaxed, yet confident attitude continues into practices and competitions.

“She has amazing work ethic and can always manage to stay super positive,” Molony said. “Marie definitely has a ‘bring it on’ type of attitude.”

Molony added that although Kimumba has no children of her own, she cares for the rest of the team like they are her own. For that reason, she is often referred to as the “team mom.”

“She is my best friend, and supports the team on and off the track,” Molony said. “She is our biggest fan.”

Head track and field coach Scott Santella says that Kimumba’s dedication towards improvement is what keeps her times dropping lower every meet.

“If Marie continues to develop her running skills, she could become a world class athlete,” Santella said. “She shows up to practice every day ready to work and get better.  Her work ethic alone inspires others to give more.”

Kimumba’s most recent victory was at the WSC Championships in Ventura, where her 58 second time in the 400-meter sprint took first place. She says this was her most rewarding day as a college athlete thus far.

“I was pretty nervous that day,” Kimumba said. “I remembered talking to coach Santella about how nervous I was, but I went out there and did my best.”

She had already raced 300 meters total that day, but Kimumba said she was determined to get the victory she deserved in the 400. She said she had been training all season for this moment and it didn’t take very long before she knew this was her race.

“I could have ran faster time but at that point I didn’t have anyone to chase so it was kind of hard,”  Kimumba said. “I guess I was just happy to make it to the finish line with a victory.”

Once she has completed her in Santa Barbara, Kimumba said she plans on moving to France, where she will continue pursuing a life of running competitively.

“I found a great coach in France, and I plan on making running my full time job,” Kimumba said. “I also plan on studying at Rennes University in Brittany at the same time, so it should be interesting.”