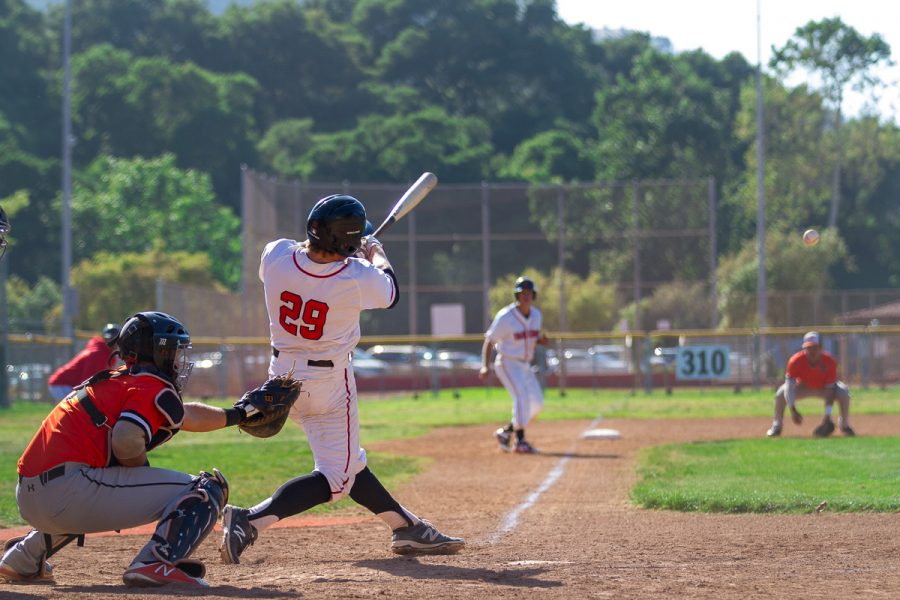 Jake Holton, Santa Barbara City College Vaquero, hits the game winning ball, as John Jenson waits to run from third base to home plate, and score run number 7. On Thursday, April 26, the Vaqueros played their last game of the season to qualify for the semi-finals, beating out the Ventura College Pirates, 7-5, at Pershing Park, in Santa Barbara.

City College’s men’s baseball team advanced to the playoffs for the eighth straight year after a 7-5 must-win comeback effort against Ventura College on Thursday.

Needing a win against Ventura and a Cuesta win against Allan Hancock to get a playoff spot, the Vaqueros did what they needed to do to advance.

“It’s awesome to make the playoffs again,” Jake Holton (No.29) said. “We knew what we had to do and luckily Cuesta was able to help us out.”

Ventura got off to a strong start, starting the game up 2-0 after a 2-run homerun. After an RBI single and an error, the Vaqueros found themselves down 4-0 after the first two innings.

The Vaqueros began to climb back into the game after Elijah Hodges (No.7) turned the tides with two outs in the fourth inning. After hitting a ball that was misplayed by the outfielder, Hodges drove in two runs with a 2-run double that scored Mitch Sancier (No.34) and Nicholas Prainito (No.3).

“We got a break there when they misplayed a pop up, which kinda gave us some life,” said head coach Jeff Walker. “Then Will Blackburn (No.28) came in on short rest after Churchill and did an outstanding job.”

Blackburn relieved starting pitcher Ian Churchill (No.17) after he gave up four runs, three of which were earned, five hits and three walks in 4.1 innings. He also struck out seven batters.

Patrick Caulfield (No.9) got the fifth inning going for the Vaqueros with a one-out single. The next batter, John Jensen (No.13), then got to second on an error that scored Caulfield. Holton followed with a single that drove in Jensen to tie the score at 4-4.

“We knew our offense would start hitting,” said Holton. “We’ve faced that pitcher a few times and we knew we had the advantage later on in the second or third time down the lineup. It was good to pounce on him and get him out of the game.”

Boston Hubbard (No.6) pinch hit for Hodges in the sixth inning, which proved to be a good decision by coach Walker. With one out, he singled and then stole second base, which led to a bad throw by the catcher, and advanced him to third base. Phil Quartararo (No.26) then drove him in with a sacrifice fly to deep center field to give the Vaqueros the lead for the first time.

The only blemish on the night for Blackburn came against the first batter of the seventh inning.

Dayton Provost, who went 5-5 with a homerun, triple and six RBI’s on Tuesday’s win over the Vaqueros, went yard again on a ball launched down the right field line that tied the game 5-5.

Blackburn then retired the next three batters to end the inning. He finished 3.2 innings of play while giving up just one run on three hits.

Reinhard Lautz (No.2) singled to first in the eighth inning and advanced to second on an error. Jensen followed with an RBI single. He then stole second base and reached third on a throwing error. Holton singled in Jensen to give the Vaqueros a 7-5 lead.

“We’re just gonna need to tighten up our defense,” said Holton. “I think we need to focus on that and not be afraid to make a mistake. I think we’re a little tentative right now.”

Things got dicey for the Vaqueros in the ninth inning after the defense made two errors. With one out and the bases loaded, Holton then retired the next two batters to end the game. He earned his 11th save of the season, which leads the state and is a Vaquero record. He also hit 2-4 with 2 RBI’s.

“Our pitching lines up well,” said Walker. “We’ve got Brett Vansant (No.23), who’s been our best pitcher the last couple outings. Of all the teams that fall into the low seeds, we like our chances.”

The Vaqueros will play in the SoCal Regionals on Tuesday with a location and opponent yet to be announced.