SBCC softball comes out on top after battle against Moorpark 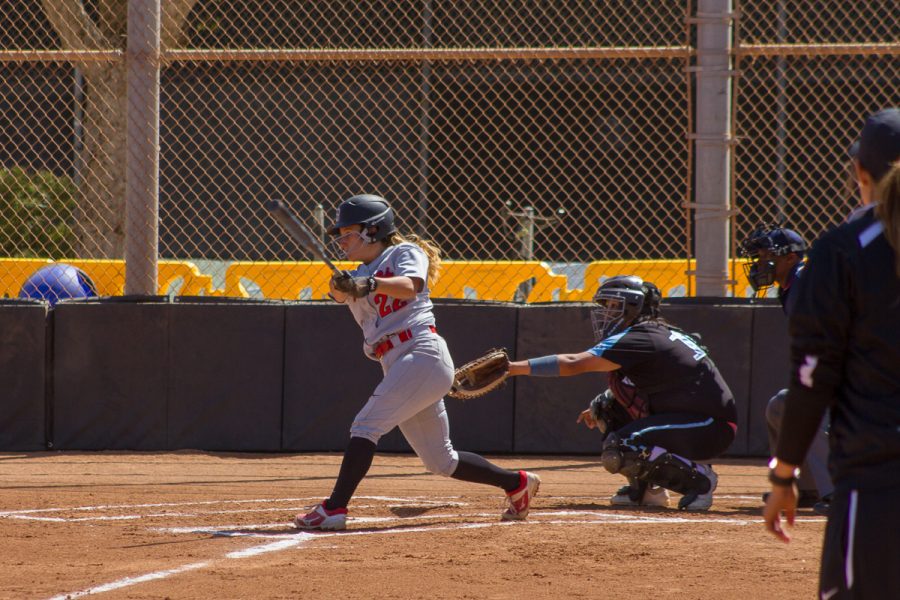 Sloane Greeley got the Vaqueros on the board with a hit at base that got Janet Salas a run to home in the game against the Moorpark Raiders on Thursday, April 12, at Pershing Park, in Santa Barbara. The Raiders were up by four early in the game, but the Vaqueros came back to win 6-4.

City College trailed by three early in the game, but made a crucial stand in the third inning that turned the tide for the Vaqueros.

“Sometimes you have to have a little bit of luck on your side to get the momentum going and then hen we definitely started hitting the ball more,” said head coach Justine Bosio.

The Vaqueros got off to a slow start, finding themselves down 4-1 going into the third inning. Calista Wendell(No. 10) got the start for City College, but was pulled after the second for Isabella Gregson(No.5). Gregson came in and the first three batters got on base for the Raiders.

With no outs and the bases loaded, Gregson dialed in as the Vaqueros made their stand. They were able to get three consecutive outs without allowing a single run in the process.

“I kept the ball at the corners of the plate which helped a lot with grounders and pop ups,” Gregson said. “I took a deep breath before every pitch and I knew I had to keep it off the plate and did the best I could with that.”

After the Vaqueros made their stand in the top of the third inning, the momentum shifted and they were able to wake up the bats and continue a wild third inning. The inning started slow for the Vaqueros with the first two batters getting out.

The comeback started when first baseman Emily Brand(No. 21) hit a single to third, but the third baseman for Moorpark threw the ball off Emily’s helmet into right field which allowed Emily to score and make the score 4-2. The next batter, Sloane Greeley(No. 22), who normally plays left field, played catcher today hitting a triple to be brought in by a single from shortstop Brandi Almaraz(No. 9)

Gregson was next up, and she doubled to right field allowing Almaraz to tie the game 4-4. Gregson would later score off a grounder to shortstop by second baseman Madison Foster (No. 3), taking the lead 5-4. The Vaqueros were led at the plate by Greeley who went 3-3 with a double, triple and two RBI’s.

“I was just going to the plate calm and collective just doing my thing trying to score the runner and have fun with the game,” Gregson said.

The Vaqueros would add another run to their lead in the fifth inning when Greeley hit a double to center field and drove in Brand to make the score 6-4.

The Vaqueros’ defense was tested again in the sixth inning as Moorpark loaded the bases with two outs, but once again they were able to get out of it. Gregson would finish the game off in the top of the seventh to bring home the win.

“When Isabella’s changeup is working it definitely keep hitters off and that is what we wanted to keep going with,” Bosio said.

The Vaqueros improved their overall record to 12-15 and 4-6 in conference play. Their next game is Saturday against Santiago Canyon at Ventura College. Their next home game is next Tuesday against Santa Monica at Pershing Park at 2:30.