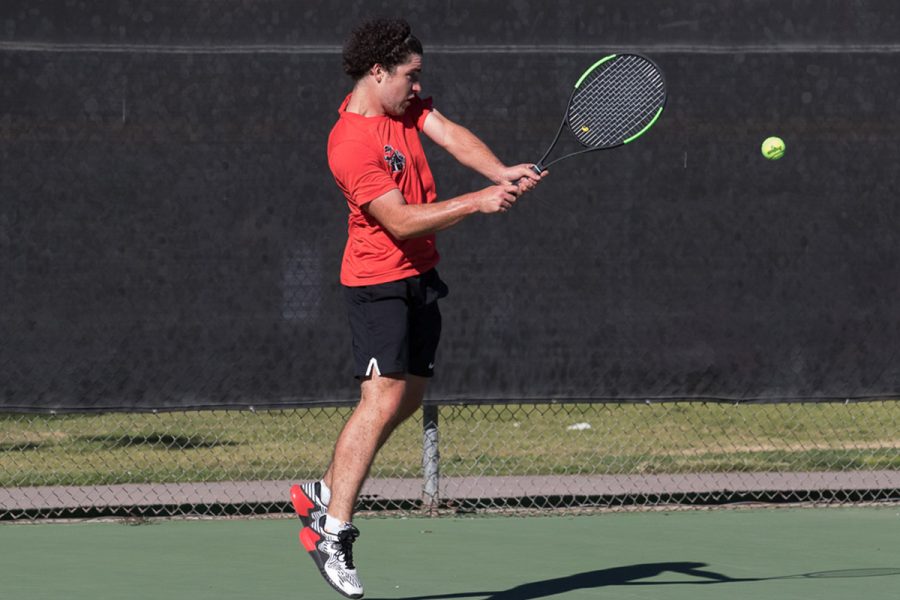 SBCC men’s tennis team lost its seventh game this season after being defeated by Ventura College on Thursday at Pershing Park.

“They’re just a good team,” said Vaqueros head coach Chris Mcbride. “They’re the number one team in the conference for a reason.”

Although visibly frustrated by the defeat, the Vaqueros were prepared for its exceedingly tough opponent. The last run in with Ventura college ended in a similar 9-0 defeat.

Freshman Guillaume Daurelle said that he didn’t play as well as he wanted to, but did his best to maintain composure against some of the top tennis players in the Western State Conference.

“I’m pretty tired. I’ve been pretty sick, and I just made too many mistakes,” Daurelle said, “but I think they just played really well.”

Although he admitted that he needs to be more aggressive for next week’s match against Glendale, Daurelle was satisfied with his ability to remain calm throughout the grueling match.

Unlike Daurelle, City College freshman Pierre Alexandre Fumat said that the pressure may have gotten to him, and that he performed far below his own standards.

“I had a good opportunity to win today,” Fumat said. “Unfortunately, I just didn’t take it. I didn’t feel my serve at all, and I was definitely frustrated.”

Daurelle and Fumat ended the day with an exhaustingly fast-paced doubles match against Ventura College’s Australian pair, Manu Rowe and Alexander Martin. The expert placement of Daurelle’s serves and returns, as well as Fumat’s instantaneous reflexes was no match for the duo from down under.

Rowe and Martin did not appear to break a sweat as the afternoon sun beat down on them. Their ability to consistently rally until the two Vaqueros allowed an opening was crucial to their victory.

Fumat is already looking at ways he can use his performance to better prepare himself for the remainder of the season, like perfecting his new serve.

Daurelle said that his main takeaway from the defeat was that his overall intensity needs to increase, but he will continue to play smart like he has done thus far.

Coach McBride also said he looks to use today’s loss as a learning tool to help his team maintain composure for the three remaining matches of the regular season.

“We competed well today,” said McBride. “We just need to continue to work our strategies and give 100 percent out there on the court.”

The Vaqueros are preparing to redeem themselves at Glendale Community College next Tuesday, where they will fight to keep their third place standing in the Western State Conference going into the final two matches of the season.