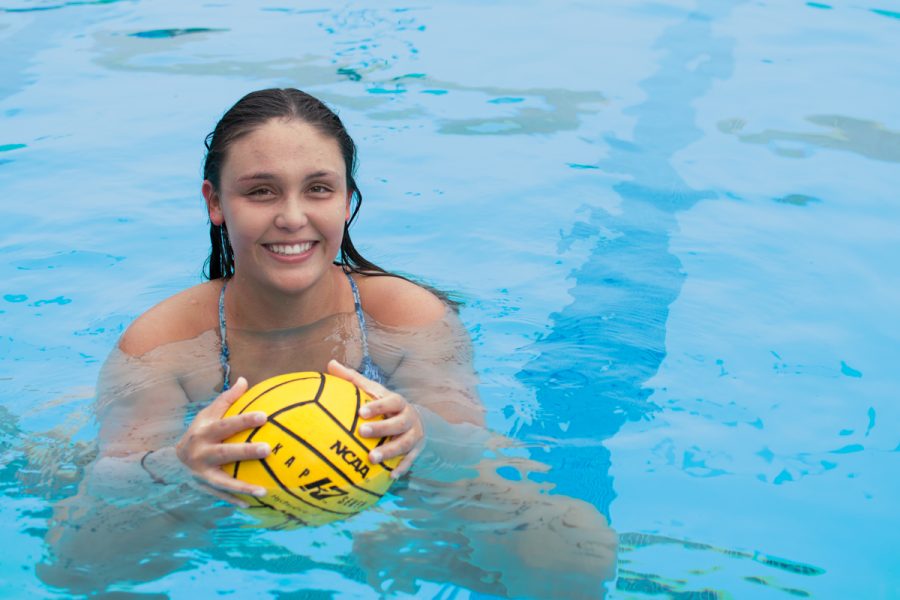 Alyssa Russell-Sadoff during practice at San Marcos High School, on March 4. Russell-Sadoff plays center guard for the Vaqueros and was recently awarded as City College's Scholar Athlete of the Year.

Water polo player Alyssa Russell-Sadoff has been awarded SBCC’s Scholar-Athlete of the Year for her excellence as not only an athlete but also a student.

In her freshman year alone, she helped lead the water polo team to its first ever state championship, while also competing on the swim team and being a full-time student, earning a 3.95 GPA.

“I was a bit shocked when I found out I had won the award,” she said. “One practice my coach told me I had been nominated but I didn’t think much of it because I didn’t think I would win.”

“I was very surprised but honored at the same time that I was awarded it.”

Russell-Sadoff earned first-team All-Western State Conference, All-Southern Cal and All-American honors after starting in 28 of the team’s 33 games, notching 19 goals, 32 assists, and 34 steals. She was third on the team in assists and fourth in steals.

“She did not miss one practice or game all year despite being injured and playing one of the most physical positions. That is what is most impressive about her,” said head coach Chuckie Roth. “Aly is a really tough kid. She never complains and always gives 100 percent effort.”

Getting to where she is now wasn’t easy for Russell-Sadoff. Her schedule revolves heavily around school, be it in the pool or in the books. The lifestyle of a student-athlete is a difficult one, and it takes a lot to be up to the task.

“I have to admit it is difficult. My life is a never-ending cycle of sleeping, eating, going to school and practice, and then eating some more,” she explained. “Being a student-athlete is like having a full-time job without the pay. I am very happy though, because my teammates push myself and each other to succeed.”

She received praise for her character and mindset from teammate Kelee Shimizu.

“She is always happy. Even if it is a tough practice she will always be smiling and have a great attitude,” said Shimizu. “To her, she accepts the outcome of the game. Whatever happens, happens. She knows that if we worked hard and she did her best, then that’s all you can ask for. It really shows the maturity in her.”

Russell-Sadoff first began playing water polo in her freshman year of high school to join a sport and avoid having to take her Physical Education class.

“My friend and I tried out for cross country, which we quickly realized was a bad decision and left the tryouts early,” she said. “We went towards the pool deck and she said our next tryout should be for water polo. I didn’t know anything about it, but I didn’t like P.E. so I was up for the new experience.

“We talked to the coach and he asked us if we knew how to swim, and we definitely lied to him and said yes. So here I am my freshman year in college, still doing water sports.”

She said she hopes to transfer to a Cal State school, and major in Liberal Studies with the goal of becoming an elementary school teacher.

“My future is up in the air at this point. It would be great if I could play water polo at the next school I go to. If not then I would play on a club team, so I will play regardless. Transferring to a good college and getting academic scholarships after SBCC is very important to me.”

Her current coach is thrilled that she earned the honor for Scholar-Athlete of the Year and said she deserves to go to a top school.

“I was so happy for her,” Roth said. “Out of high school she was very strong academically and should have gone to a UC. I was super stoked that she has continued the same academic dedication here at SBCC. She is a very hard worker with a great work ethic.”