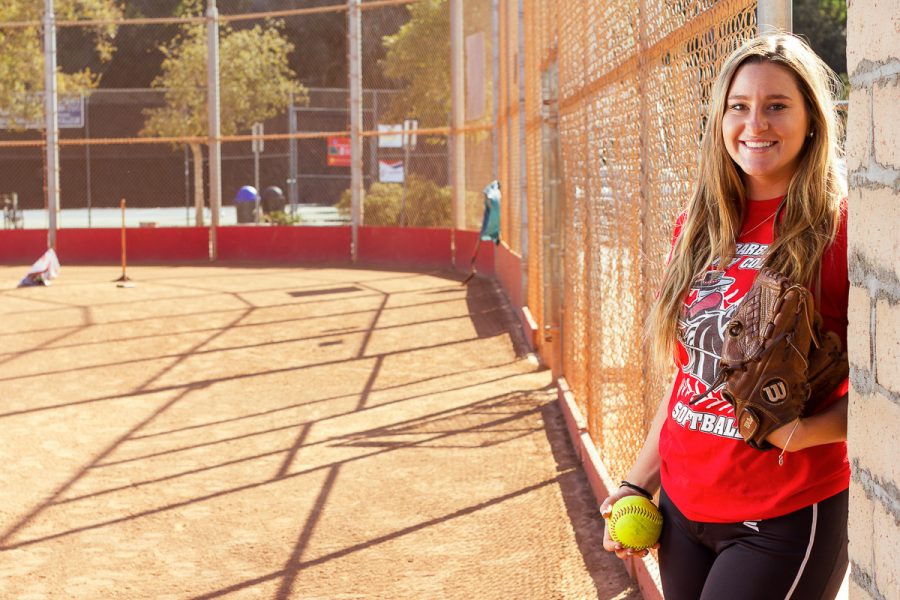 Calista Wendell, Vaquero softball pitcher, on Tuesday, Feb. 27, at Pershing Park in Santa Barbara. Wendell is a sophomore from San Diego, who has pitched 51 innings this season with 40 strikeouts.

SBCC softball pitcher Calista Wendell (No.10) stands out as the core of her team to her coaches and her teammates, and is the number one pitcher on the team.

Wendell is in her sophomore season at City College. She attended Del Norte High School in San Diego and said she knew she wanted to play college softball, she just wasn’t sure where.

“I decided to come play at City College because I knew I wanted to pursue my softball career,” said Wendell. “I just wasn’t sure where. Santa Barbara just seemed like the perfect place to figure it out while also getting a good education.”

Wendell has become the number one pitcher for the Vaqueros and set her career high with 11 strikeouts in her last game against Allan Hancock. She is 18th in the state with 40 strikeouts and carries an earned run average of three runs per game.

“It has been fun to watch Calista develop this year in the circle,” head coach Justine Bosio said. “When your players can develop from their freshman to sophomore year, and come out and make a difference, that is what is special to a coach.”

Wendell’s hard work from her freshman to her sophomore season has shown in her stats. In 15 less appearances than last year, she is only 11 strikeouts away from matching her total from last season. That kind of hard work is the reason she has become one of the leaders of the Vaqueros.

“Calista works really hard during practice and it shows in the games,” said sophomore teammate Isabella Gregson (No.5). “She is a great team player and is always there for her teammates.”

She has become a much stronger pitcher after working with Bosio on the complicated mental aspects of pitching, and it has taken her to a whole new level on the field.

“In her sophomore year, Calista has been able to be more effective in the circle by hitting her spots and getting ahead of batters,” Bosio said. “We have been working on the mental side of pitching and it has been showing by her ability to keep us in every game she pitches.”

Wendell’s love for softball came at an early age from her father, who she says continues to inspire her every day.

“I started playing softball when I was 4 years old because I loved watching my dad play slowpitch,” she said. “He was my coach from day one and has taught me everything I know about this game.”

Wendell is putting everything she has learned to good use, having an outstanding career as a Vaquero. Her teammates help her out by making great plays on the field and they give Wendell the confidence she has on the mound.

“Cali is hard working and gets the job done when she sets her mind to it,” said sophomore teammate Jasmine Manson (No.16). “She is one of the best pitchers I have played with. She is a leader in the circle and we always know how to pick each other up on the field.”

Wendell said she hopes to be recruited by a four-year school somewhere out of state where she can continue her softball career, as well as continue to study kinesiology with aspirations of becoming a physical therapist when she graduates. She hopes to finish the season strong and has enjoyed her time at City College.

“My career at SBCC has been the best experience I could’ve asked for,” she said. “I have grown so much, not only as an athlete but as a person in general. I have learned discipline, time management, mental toughness, teamwork, and perseverance and am more confident than I have ever been.”

The Vaqueros are 8-8 on the season and 0-2 in conference play. They will next play at 2:30 p.m. on Tuesday, March 6 against Cuesta College at Pershing Park.