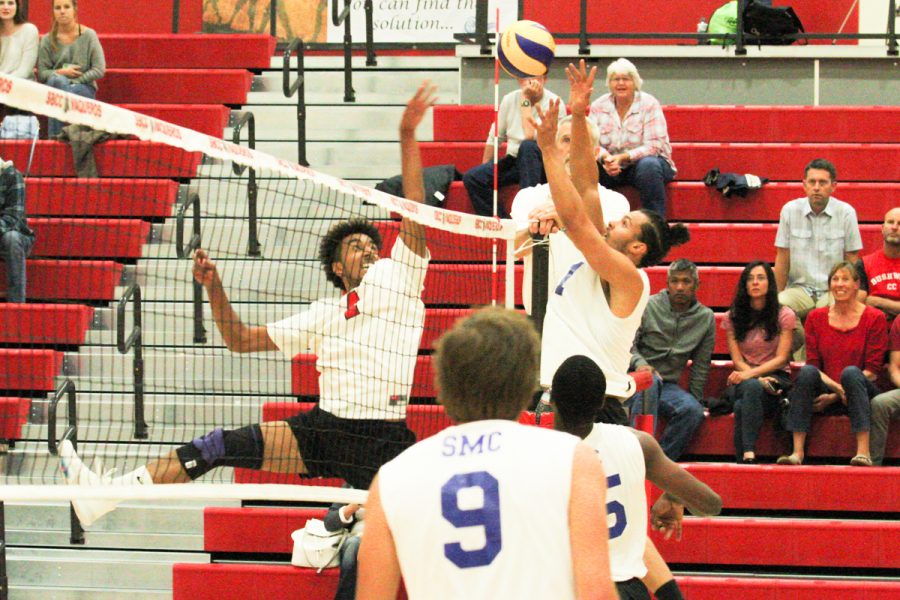 SBCC men’s volleyball triumphed over Santa Monica 3-2 in a showdown Wednesday night at the Sports Pavilion.

City College came into the game ranked fifth in the state, with Santa Monica just ahead in fourth. Neither team disappointed, giving the fans a great show.

“That was very high level volleyball on both sides,” head coach Jon Newton said. “A compliment to our guys because we played this game like we played our last game and we are holding ourselves to a standard of playing like this.”

City College was led by middle blocker Cameron Fry (No.15) who, while not leading the team in stats, led the team with his energy. After every point the Vaqueros scored Fry would run around and scream at the crowd and get his team fired up. Fry finished the game with an impressive 10 kills.

The crowd played a huge role in the game, cheering and screaming after every point. The game was so intense, and the crowd so loud, the pavilion had the atmosphere of a playoff game.

“In moments that we are down we need one small spark to get everyone energized,” Fry said. “We provide lots of cheering, lots of yelling, and you grab your players and tell them that they are doing great and that’s what brings the energy.”

City College got down early in the first set 15-9, then stormed back to score seven straight points to take the lead 16-15. The Vaqueros won the first set 25-22, but Santa Monica came back and took the second set 25-19.

The Vaqueros had great production from outside hitter Kyle Skinner (No.14) who finished the game with 13 kills. The team also got outstanding production from setter Zacariaz Mancha (No.7) who replaced starting setter Adam Simonetti (No.12) who couldn’t make it to the game. Mancha led the vaqueros with 41 assists.

City College and Santa Monica traded wins over the next two sets as the teams headed into the fifth set tied 2-2. The winner of the fifth set is the first team to 15 points and the team has to win by two points. In the fifth set the Vaqueros were down 11-7 when Newton called timeout.

“We had rule between our captains this game,” Skinner said. “If we ever got down we had to make our team laugh and we did that. We came in and Cameron made everyone laughed and that turned the game around.”

The Vaqueros came out of that timeout locked in, scoring 7 of the next 8 points to take the lead at 14-12. The game ended on an ace serve by Fry.

Once the ball hit the ground off Fry’s serve the crowd stormed the court, the team and the crowd going wild on the court as Fry ended up ripping his jersey off in excitement.

“The crowd was awesome, that energy really drives our team a lot and it got us really excited to play,” Skinner said.

The Vaqueros improve their record to 6-1 on the season. City College’s next game will be Friday as they take on the number one ranked team in the state and undefeated Long Beach City College. The Vaqueros next home game will be Saturday, March 10 against Grossmont College.