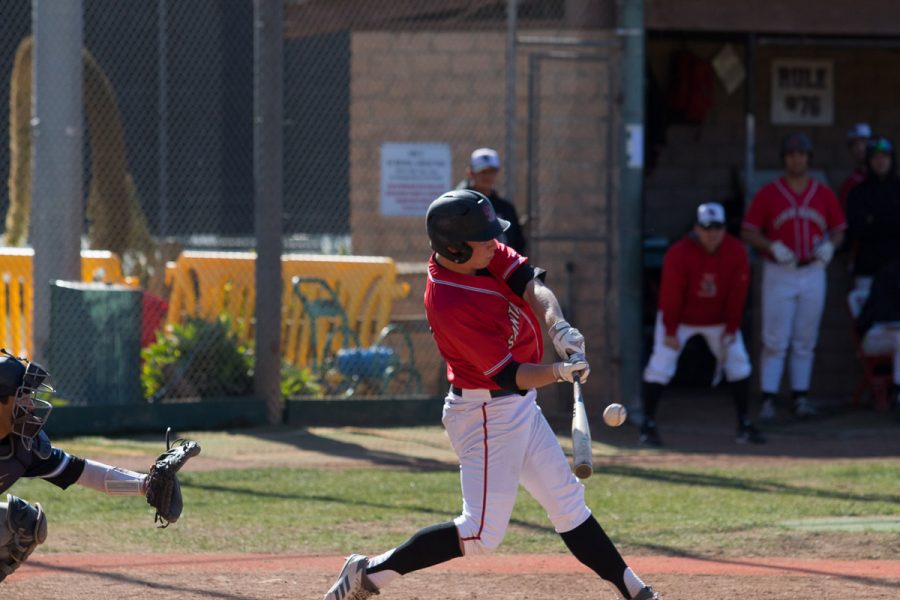 The SBCC baseball team lost a heartbreaker to El Camino College 14-10 on Saturday at Pershing Park.

“I’m disappointed in our defense in the seventh inning,” head coach Jeff Walker said. “Some key errors were really the difference and then it all snowballed. We didn’t have anyone to come out of the bullpen and get a big out or someone to make a big play behind the pitchers.”

The Vaqueros had plenty of offense throughout the game to give them a lead that seemed to be comfortable. After El Camino scored the first run of the game, City College promptly answered to tie the score 1-1 after one inning of play. The next inning,  first baseman Phil Quartararo (No. 26) homered to give the Vaqueros the lead.

Up 2-1 in the third inning, third baseman Jake Holton (No. 29) launched a homerun to left field that scored three runs and put the team up 5-1. The Vaqueros rode the momentum of the home runs and took advantage of mistakes made by the Warriors in the fourth and fifth innings.

“We had the offense going all game,” said outfielder Reinhard Lautz (No. 2). “Eventually the pitchers stopped throwing strikes and we couldn’t make plays we needed to.”

Outfielder John Jensen (No. 13) drove in the final two runs of the game for the Vaqueros in the sixth inning with a bases loaded single.

“The bright spot so far has been our offense,” said Walker. “Some guys are having nice seasons so far so hopefully they will keep that up and keep generating runs. Hopefully the pitching will catch up physically and mentally to the offense.”

The Warriors comeback began in the seventh inning with two errors by the Vaqueros which led to consecutive two-run doubles. By the time the inning was over, the Warriors had put together nine runs and tied the game at 10-10.

“We just weren’t attacking the strike zone in the seventh. Our pitchers stopped throwing strikes and we made a couple of errors that really hurt us,” said Lautz. “After that inning, we still played together even though [El Camino] was chirping at us the whole game.”

Tensions were high during the game, as the El Camino dugout trash talked the Vaqueros in an attempt to get inside the player’s heads.

El Camino added on four more runs in the eighth. After retiring the first two batters of the inning, pitcher Jonathan Keller hit the next two with pitches. Those two hit batters resulted in a two run double and a two run home run. El Camino scored four runs in the inning off of just two hits and put the game away with a 14-10 lead.

“This is a compound effect for the week after having two below-average starts from our pitching,” said Walker. “We can’t keep doing things like this in the late innings. We were running on fumes after our starters went one inning on Tuesday and four innings today.”

The Vaqueros will next play against Pasadena City on Tuesday, Feb. 27. The next home game for the Vaqueros is at 1 p.m. on Saturday, March 3 against LA Mission.

City College is now 9-6 after losing its first home game of the season.

“We need the pitchers to step up,” said Walker. “It’s really tough to play defense when our guys can’t throw strikes. It’s been really, really disappointing what we’ve done on the mound this year considering the quality arms we have. If we can keep putting up 10 runs offensively I think we’ll figure out our defense and pitching.”