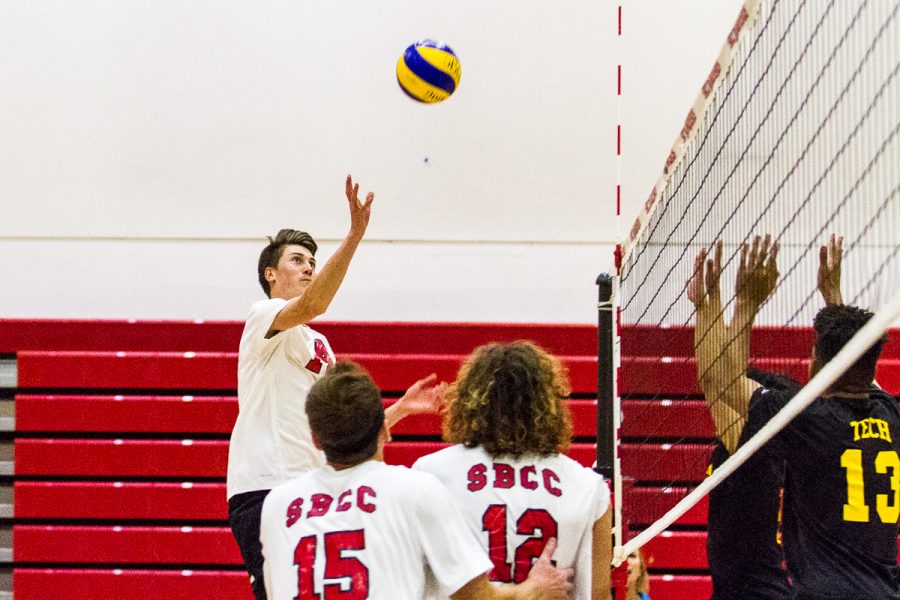 Kyle Skinner (No.14) pokes the ball over the Los Angeles Trade-Technical College defense on Feb. 21, at the Sports Pavilion, in Santa Barbara. “My passing was pretty good, but not as good as I wanted it to be,” Skinner said after the Vaqueros dominated LA in 3 sets.

SBCC men’s volleyball stays undefeated after a 3-0 sweep against LA Trade Tech College at the Sports Pavillion on Wednesday night.

In what was the volleyball team’s home opener, City College played well enough to win despite not playing up to their own standards, being ranked 4th in the state.

“It wasn’t our volleyball that we played tonight,” head coach Jon Newton said. “It was a slower game and hard to create momentum. Our offense is usually faster and it threw off our blocking.”

The Vaqueros got off to a slow start in the first set as LA Trade Tech grabbed a 7-4 lead, but got it together and scored three straight to tie the score at 7. Later in the match they would go up 18 to 13 off of a severe error from Trade Tech. LA stormed back and grabbed the lead 22-21 because the Vaqueros were out of rotation on a serve.

City College finished the first set strong as three of their final four points came from outside hitter Haward Gomes (No. 4) on block assists. The Vaqueros went on to win the first set 25-23. Gomes led the team with 10 kills.

“I was excited to play tonight,” Gomes said. “Tonight was my first home game in two years so I was ready to play.”

Gomes gave the Vaqueros the spark they needed. After every block assist he had at the end of the first set he turned to his team yelling in excitement.

“Haward has been our guy,” Newton said. “He comes in and plays hard. He is a third year guy, he is experienced, and his volleyball IQ is high. He does a great job for us.”

City College came out in the second set intensely, grabbing the lead and never looking back. LA Trade Tech was able to get the score to 16-12 off a Vaquero error, but no more. The Vaqueros caught fire and closed the set scoring 9 points and only giving up 2, scoring their final point off a Trade Tech Error to win the set 25-14.

City College got great production from outside hitter Kyle Skinner (No. 14). Skinner finished the game with 6 kills and 5 digs.

“I thought I played alright,” Skinner said. “My passing was pretty good but not as good as I wanted it to be so it was an okay game for me.”

In the third set, Newton was able to put in reserve players to get the job done, winning the third set 25-20. City College also had solid production from setter Adam Simonetti (No. 12) who led the Vaqueros with a game high 25 assists.

The Vaqueros improve to 5-0 on the season and are only one of two teams left undefeated in the state. The Vaqueros are ranked 4th in the state but will be put to the test on Friday as they travel to play the 6th ranked team in the state, El Camino College. City College’s next home game is Wednesday, February 28 gainst Santa Monica College.