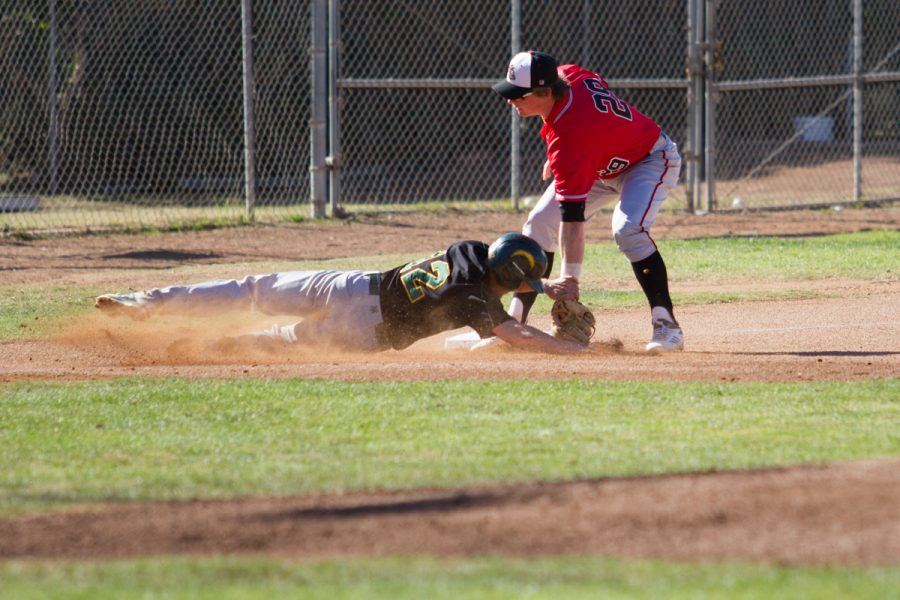 From right, Jake Holton, City College Vaqueros (no. 29) tags out Aaron Reardon, Napa Valley Storm (no. 12) on third base. The game was held at Pershing Park on Saturday, Jan. 27 in Santa Barbara.

On a warm, sunny day at Pershing Park, the Vaqueros’ offense got rolling against visiting Napa Valley and made sure that Napa had a long six hour drive back North.

“It feels unbelievable to start the season this way,” said outfielder Nicholas Trifeletti (No. 27), who hit a homerun in the season opener on Friday.

The Vaqueros scored in the first inning due to two errors committed by Napa.

In the third inning Phil Quartararo (No. 26) doubled with two runners on to put City College up 2-0. He went 2-5 with two RBIs. They would score again in the inning off of a sacrifice groundout.

Starting pitcher Jayden Metz (No. 36) pitched the first four innings while giving up no runs off of just two hits and striking out six batters. He was relieved after the fourth inning when the Vaqueros defense gave up two runs, neither of which go to Metz.

“We came in knowing we could pitch,” said head coach Jeff Walker. “Going forward we need to take care of the baseball and play better defense.”

The Vaqueros responded to Napa by getting back two runs while just getting one hit in the inning.

Pitching remained steady throughout the game and pitcher Ian Churchill (No. 17) garnered praise from his coach.

“Ian Churchill coming in for the first time and striking out the first three batters was really impressive,” said Walker.

In the sixth inning, outfielder Reinhard Lautz (No. 2) drove in a run followed by a John Jensen (No. 13) double that had the Vaqueros sitting on an 8-2 lead.

In the eighth inning, the Vaqueros would add on five more runs to put the game out of reach.

“We put up a lot of runs in both games,” said Metz. “The offense is doing really well.”

Despite a 10-1 lead entering the eighth inning in Friday’s game, the Vaqueros held on to a 10-8 win after surrendering seven runs late.

“We had a sideways eighth inning yesterday,” said Walker. “Dylan Porter (No. 25) came in at a high pressure situation and struck two guys out. That was the most impressive thing from this weekend.”

With the first weekend in the books, the Vaqueros will next play Saddleback Thursday, February 1 for a three game series.

“The first weekend there’s a lot of uncertainties,” said Walker. “A lot of nervousness. A lot of guys playing college baseball for the first time.”

“It was a positive weekend and there was a lot of good things. We have to learn from our mistakes but also the positives because our schedule is going to get tougher.”