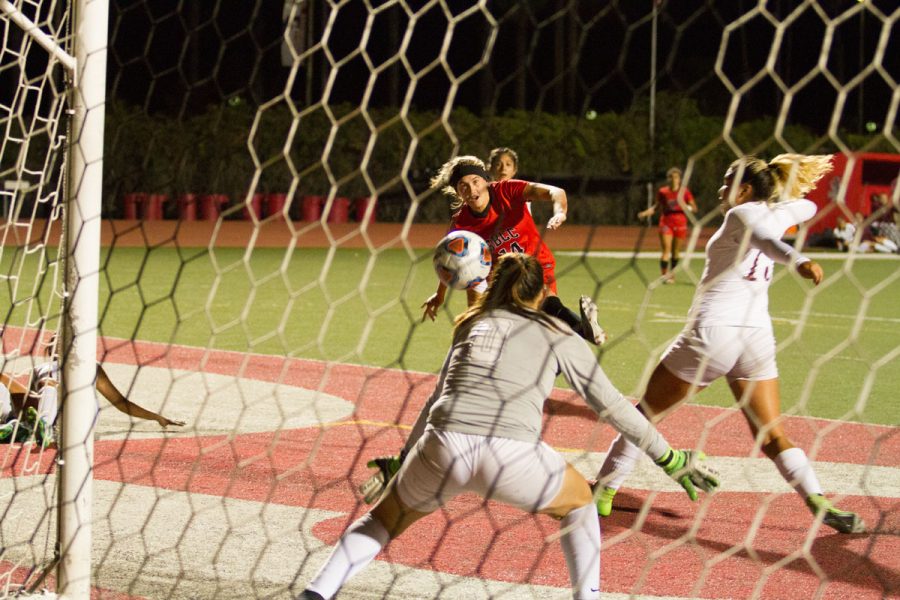 City College took the win 4-0 in its first round of the So Cal Regional playoffs against Antelope Valley College on Saturday, Nov. 18.

The Vaqueros won their 18th consecutive game on the cold November night keeping their spot as No. 1 in the regional seed. In the aggressive game at La Playa Stadium, Antelope Valley College was unable to put any goals against City College and had limited shot attempts. City College remains undefeated with its record now at 18-0-1.

“I think this is one of the games we played best. We knew this was really important so we needed to give it everything,” said freshman Lourdes Gilbert (No. 14).

The first goal was made in the 29th minute by Gilbert.

Gilbert also made the second goal for the Vaqueros in the 34th minute on the assist of middle forward, Amber Mulligan (No. 13). Gilbert stayed a heavy presence with several more shot attempts.

“My speed up top, being aware of the defenders, and getting inside but then opening up and focusing on the goal in front of me is what really helped me,” Gilbert said.

In the second half of the game, Isabella Viana (No. 11) made the third goal in the 64th minute after being assisted by Katherine Sheehy (No. 4). Viana leads the team in goals with 17.

“That goal felt really good. I had a lot of opportunities and it was really frustrating to not score on those, but I’m happy to have gotten that goal,” Viana said.

“It took a little while to get into the groove of the game but once we scored that first goal it really helped to get us going. I’m really proud of my team played,” Viana said.

A collision between City College player Riley Moore (No. 21) and Antelope Valley College’s Biance Berry (No. 13) led to Berry being helped off the field injured.

In the extra time, just moments before the game ended, Moore scored the fourth and final goal for City College on the assist of Idalis Rodriguez (No. 3).

Head Coach John Sisterson who is in his thirteenth year of coaching at City College said he was delighted with how the team played today.

He said the strategy that brought them the win is to “Just win it.”

Gilbert, who scored half of the team’s’ goals, has been a key player for City College’s success this season.

She said she hopes the team will stay playing together the way they have been.

“I definitely hope we win state,” Gilbert said, “Which I’m 100 percent sure we will.”

City College will play next on Tuesday, Nov. 21 against Orange Coast College.
State Championships will be held on Dec. 3 in Sacramento.

“I don’t think of state, I just think of playing the next game so our focus now is on playing Orange Coast Tuesday and we will work the best we can to go and do a good job against them,” Sisterson said.