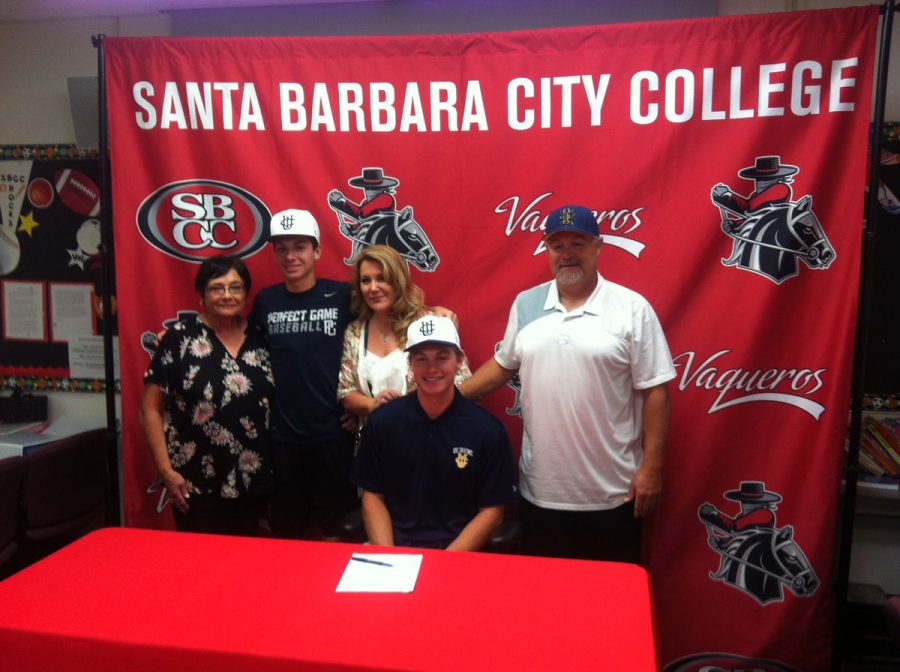 Courtesy art from Dave Loveton of John Jensen with his family during National Signing Day on Wednesday, Nov. 8, in the Sports Pavilion. Jensen signed a Letter-of-Intent to continue his baseball career at University of California Irvine.

Jensen had two other offers he was considering from UCSB and Cal State Northridge. He chose Irvine because the school showed the most overall interest in him and he was impressed with the coaching staff.

“I can’t wait to go there next year and have Ben Orloff coach me,” said Jensen.

“Orloff has been the one recruiting me for a while now and I’m excited to go there and get to work.”

Jensen won conference most valuable player as a freshman and helped City College win a conference title and make the regional playoffs for the seventh consecutive season.

“John will be an impact bat in their program immediately,” said City College assistant coach Steven Hardesty. “His athleticism will allow for him to be utilized at a variety of different positions to allow his bat to play on a daily basis.”

Jensen will leave City College after his upcoming sophomore season. He hopes to win another conference title and go deep into the playoffs.

“I’m focusing on this year and hopefully winning a title with the Vaqueros,” said Jensen.

Jensen shows up early to work and his work ethic is noticed by his teammates.

“John is always putting in max effort,” said sophomore catcher Mitchell Sancier. “He’s going to be a great fit to their team. He’s really energetic and guys will feed off of that.”

Jensen said head coach Jeff Walker has been a huge help during his time at City College both on and off the field.

He has learned to be a good person and teammate while also improving his work ethic and preparing better in the classroom.

The City College coaching staff does its best to prepare the players for the next level.

“We strive to create opportunities for student athletes to excel academically and athletically. We are very proud of John,” said Walker. “John is the first of many players from this year’s roster that will be continuing their education and baseball career at the division 1 level.”

Jensen also said his parents have been a huge help in preparing him for the division one level. His dad has coached him since he was young and his mom has always been by his side and helped him with school.

“School is hard for me so she has definitely helped me through that.

“My coaches, my teammates and my parents have all helped me through this and I can’t thank them enough.”

City College will open up the 2018 season in January with hopes of repeating as conference champions.

The team begins play on Jan. 26, against Napa Valley at home.