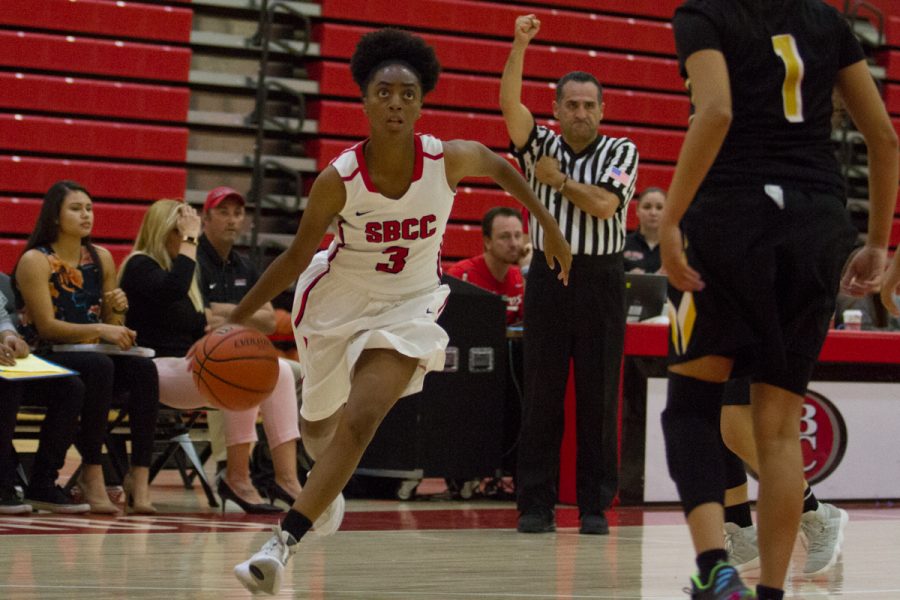 Meagan Moore (No. 3), shooting guard for City College, drives towards the basket against Taft College Friday, Nov. 10, at the Sports Pavilion gym. The Vaqueros defeated the Cougars 98-73.

The City College women’s basketball team rolled to a 98-73 win over Taft College Friday night at the Sports Pavilion in the team’s season opener.

City College jumped out to a fast start, taking a 13-3 lead early in the game. The team built onto the lead for the rest of the night and never trailed throughout the contest.

“We came out with a lot of energy and passed the ball around really well,” said sophomore Diamond Alexander (No. 23).

Everything was in favor of the Vaqueros for the whole game, with the exception of foul trouble. The Vaqueros had four starters foul out of the game, and a total of five players.

“Our biggest issue is we need to stop fouling,” said City College head coach Sandrine Krul with emphasis. “Don’t reach. It was our fault for all those fouls because we didn’t adjust to how they were playing it.

“We can’t have five players foul out. That is something we need to work on, and we will. Hopefully we are better at that tomorrow.”

All 14 of the players on the roster got onto the court, including all 11 freshman. Aaliyah Pauling (No. 32) and Kaysie Back (No. 30) were two of the freshman who played important roles in their first City College games.

“It felt great to be out there for the first time,” said Pauling. “It was a good first game of the season. I’m excited to keep this going.”

Pauling scored 18 points on 7-12 shooting, while connecting on 4-8 of her three-point attempts in just 15 minutes of play time in her debut.

Pauling began a run for the Vaqueros in the second quarter with the score 28-24. The Vaqueros offense caught fire as Pauling hit two three’s and teammate Morgan Giove connected from deep in under a minute.

“We all worked together really well tonight,” said Pauling. “It was a good team effort.”

The Vaqueros led 52-39 at the half and kept the foot on the gas the rest of the game.

“It was a great way to start the season. We got a lot of great minutes from several players, including the bench,” said Krul.

“It’s a good thing that we prepare for situations like tonight with so many fouls, because I don’t know what we would have done.”

Key members off the bench in the win were the freshman Back and sophomore Hannah Rogers (No. 42). Back scored 6 straight points to start the 4th quarter for the Vaqueros, and totalled 14 points and 5 rebounds in her debut effort. In 14 minutes of play, Rogers logged 10 points and 15 rebounds, seven of which came on the offensive end.

With 11 freshman on the roster, just three players remain from last season. Alexander, Rogers, and Morgan Giove (No. 21)

“There’s definitely a lot of new faces and it is different,” said Alexander. “But we have been working together really hard so far and our chemistry is good.”

The Vaqueros will play Fullerton Saturday, Nov. 11, at the Sports Pavilion.

“It will be a tough game, really tough. But it should be a good one,” said Krul.