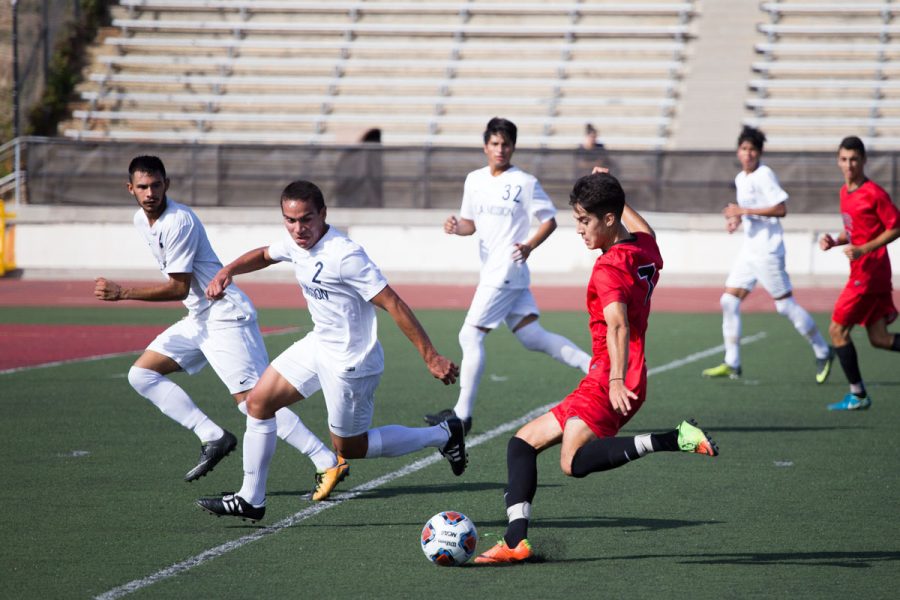 City College men’s soccer got off to a fast start and held off LA Mission for a 4-1 win,  Friday afternoon at La Playa Stadium.

“The first half we dominated,” said Adrian Gamez (No. 28), freshman from Santa Barbara High School. “The second half we came out a little lazy I feel like, because they were on top of us and we had to defend way more.”

City College scored right away in the second minute after midfielder Carlos Espinoza (No. 7) found forward Matthew Wilkinson for his fifth goal of the season.

Espinoza had three assists on the day.

City College added another goal after Gamez took the pass from forward Victor Chavez (No. 18) and shot it right past the Mission goalkeeper.

“Gamez is a key player and we always tell him to shoot when he has the chance,” said Chavez who scored his team leading 12th goal after Gamez to make the score 3-0.

Gamez has had three goals in the past two games after not scoring at all to start the season.

“It feels like I’m getting in top form honestly because I haven’t shot before, and everybody just encourages me to shoot and now I’m shooting all the time.”

Gamez has been stepping up the scoring load since the second leading goal scorer Ameyawu Muntari (No. 10) has been battling a knee injury and wasn’t active this game.

City College was close to shutting out another opponent but played a little lackadaisical to end the first half. Mission was able to score a goal in the final minutes of the first half.

“We got a little carried away the last couple minutes of the first half and got scored on,” said Chavez.
“But overall we played strong and stayed positive.”

The game did not see as much offense in the second half as it did in the first. A goal wasn’t scored until the final minutes.

Gamez got a pass from Espinoza and launched it past the goalie from around 25 feet out.

Head coach John Sisterson was not on the sideline as he was coaching the women’s team in a match at Oxnard College.

“The start really set the tone and the boys did what we asked,” said assistant coach Dylan Murphy.

Murphy praised the play of freshman defender Andrew Wakamiya (No. 4).

“I thought Andrew Wakamiya was the man of the match. It was his first start and I thought he played 90 minutes. I thought he really gave us something we might have been lacking at right back this season.”

City College remains undefeated and picked up its 13th win of the season.

City College plays next at 2 p.m. Tuesday Nov. 7, at Moorpark and then returns home on Thursday Nov. 9 for Santa Monica.

“Let’s just keep on winning. We can’t lose,” said Gamez. “We want to make this a historic season.”