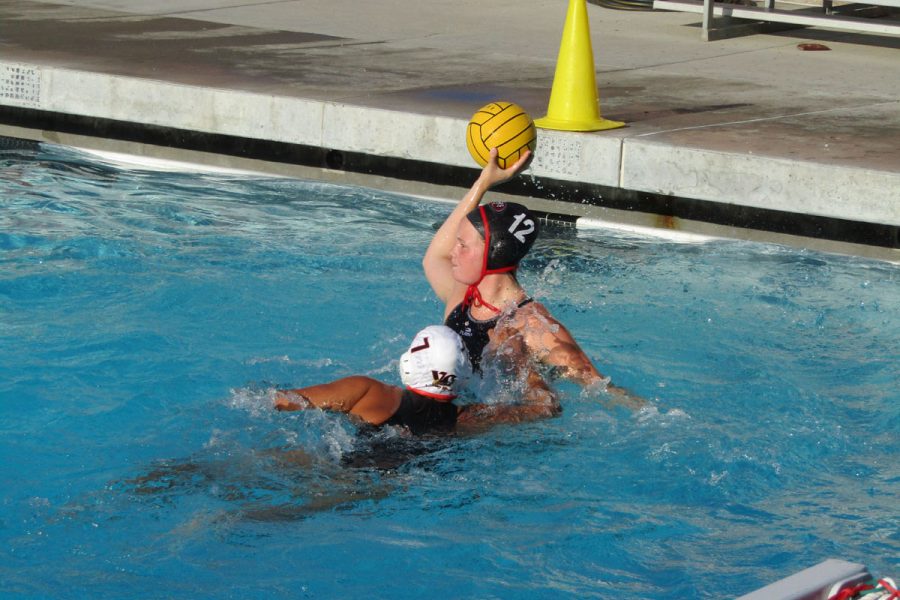 Courtesy art from David Loveton of Sarah Parson looking to pass to a teammate during a match against Golden West from.

Sarah Parson, freshman center for the City College women’s water polo team, has astonished many with her play in the pool this season.

“She is as strong as an ox,” said head coach Brian “Chuckie” Roth with a fully sunscreened face from a long practice coaching the team in the hot sun.

“I’m lucky to have her. She’s a kid that when you leave the pool deck, you think of how you can make that girl better and she wants to be better.”

Parson is second in leading the team in goals with a total of 42 this season.

The team holds an impressive 21-3 record and are 5-0 in conference play.

Parson hopes that City College will open doors for her in the pool and in the classroom.

“Being here at City College helps me learn to prioritize and get ready for transfer,” Parson said.

Parson started playing Water Polo her freshman year of high school where she competed for Arroyo Grande High School and has been playing ever since.

Parson said she lives by the “just one more” mindset that Roth has drilled into the team and applies it to not only her athletic life, but also to her academic and personal life.

“She is very supportive and she works hard. Definitely one of our strongest players,” said teammate Erika Muehring.

Her biggest motivation is seeing how much her team makes her better as a player.

“They really push me through the hard obstacles,” Parson said.

Parson said Water Polo helps channel any anger she has and uses the sport as an outlet for her emotions.

“We can get everything out in those thirty-two minutes and by the time we shake hands, we’re fine. We’re evil girls in the water,” Parson said and laughed as she pointed at her healing black eye. “But it’s what I signed up for.”

Sarah was accidentally kicked in the face during a practice on Oct. 17 that caused a laceration to her eyelid and a concussion.

Parson will be out for a few games but is excited to get back in the water.

She speaks highly of coach Roth and credits much of her success this season to him.

“I’ve never had a coach so dynamic, so involved with our team as he is.”

“I’ve also never had such intense practices,” she added.

“Her ability and desire to improve on letting go of the bad things that happen in games, not to dwell on it and let it define her,” is what Roth said has impressed him the most about Sarah.

“I’ve gotten better than I ever thought I could,” Parson said.

The City College water polo team will be hosting a home tournament beginning at 9 a.m. Saturday, Oct. 28, against Southwestern.