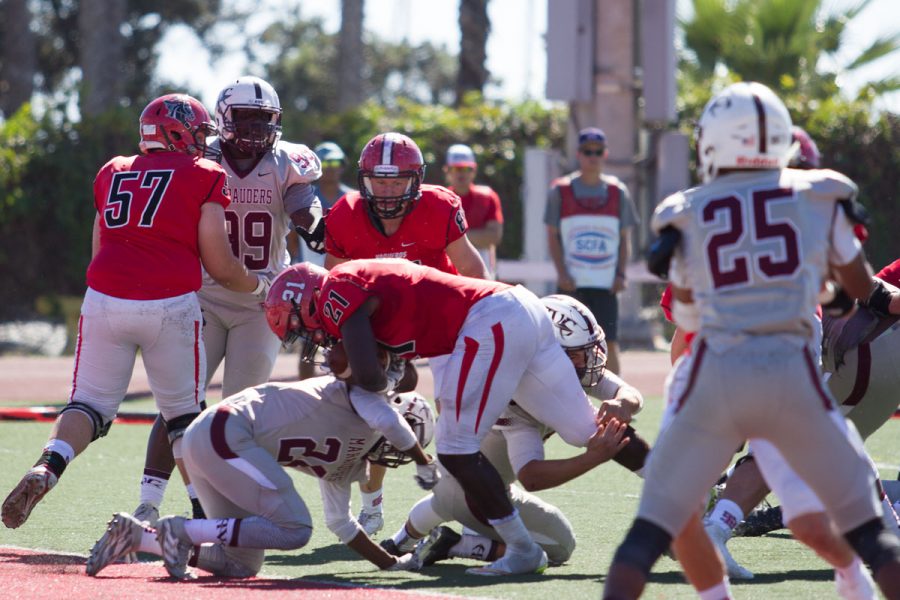 The City College football team picked up its third consecutive loss in a low scoring 17-7 game against Antelope Valley on a sunny Saturday afternoon at La Playa Stadium.

City College scored early but it’s offense didn’t pick up after that. The defense did all it could  to keep the team in the game.

“The defense played well,” said sophomore linebacker Pedro Ramos (No. 58). “The offense did alright but they didn’t convert on possessions so it made things harder for the defense.”

The Vaqueros’ only points came on the team’s first drive with a touchdown run by running back Emmanuel Nwosu (No. 21). The two-yard run capped off an impressive 13 play, 80 yard drive.

Nwosu picked up his sixth touchdown of the season and now has over 800 rushing yards.

The offense never looked how it did the first drive. Antelope Valley began applying pressure on the quarterback and recorded seven sacks.

“I don’t really have anything to say,” said starting center Wyatt Gardner (No. 60). “We just have to do our jobs and do the little things.”

“They got after us up front against our offensive line and got after our quarterback,” said City College head coach Craig Moropoulos.

DJ Payne (No. 38) of Antelope Valley had 244 rushing yards against the Vaquero defense.

The defense played well and made plays despite allowing over 200 rushing yards. Russell Enholm (No. 25) picked off the Antelope quarterback on the goal line and the defense blocked a field goal to keep the score close.

“I coach the offense. I told them [the defense] ‘we left you out on the field too much,’” said Moropoulos. “When a team is good at running the ball, you cannot keep putting them out there because they just kill time.

“I’m frustrated because I felt we had a chance to win that game.”

City College was missing its leading receiver Donald Lambert (No. 7). Receivers Julian Blain (No. 10) and Reese Perez (No. 16) stepped up and combined for 11 catches.

The Vaqueros also lost fullback Cody Perry (No. 30) to an injury in the third quarter which hindered the running game.

Despite the losing streak, coach Moropoulus feels that the team is full of fighters and there are positives to build from these performances.

City College will look to get back into the win column at 4 p.m. Saturday, Oct. 28, at Citrus College.

The team returns home for a 1 p.m. game on Saturday, Nov. 4, against LA Pierce.