SBCC volleyball star receives athlete of the week by SBART 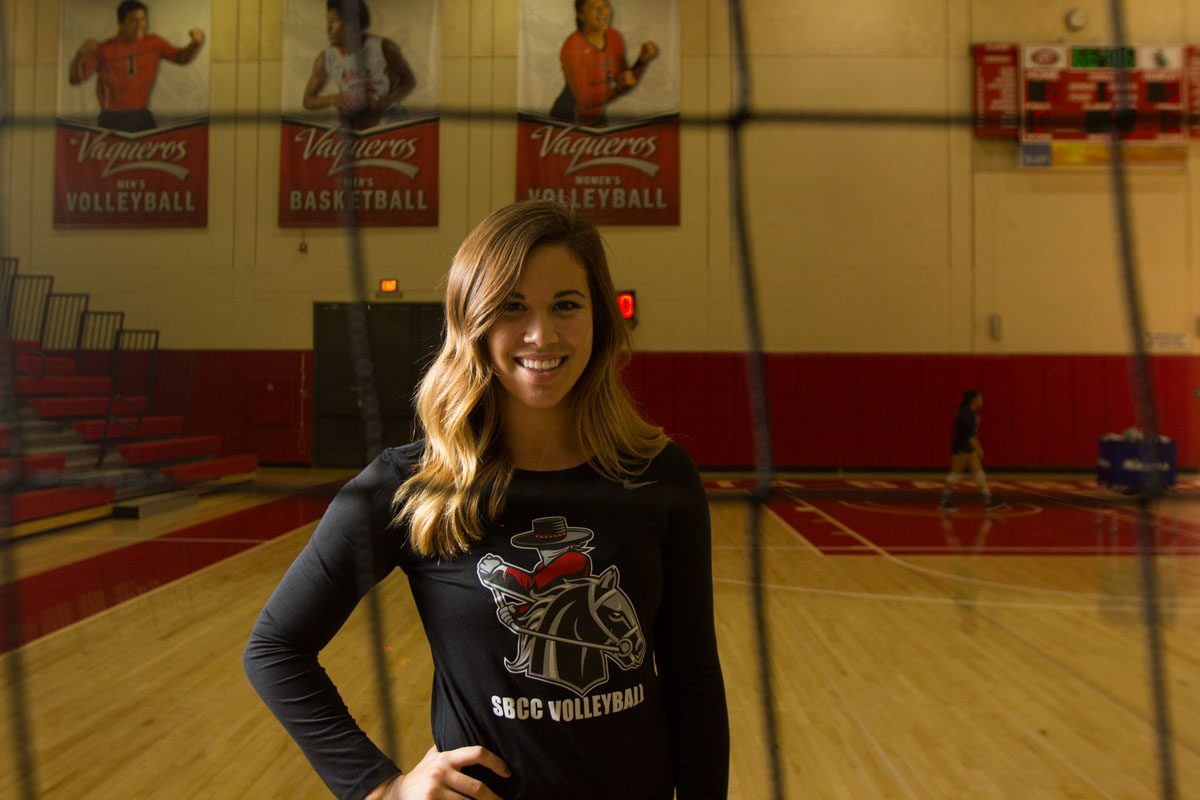 Santa Barbara Athlete of the Week Kaylene Ureno before her volleyball game against LA Mission Friday, Sept. 29, in the Sports Pavilion at City College. Ureno was awarded athlete of the week for her performance in the Brahma Invitational where she had 47 kills and 30 digs.

In a week when City College won the Brahma Invitational and upset two top ranked teams in the state, volleyball star Kaylene Ureno dominated the competition and was honored with athlete of the week by the Santa Barbara Athletic Round Table.

Ureno had 47 kills and 30 digs in the tournament. City College came back to beat third ranked Bakersfield after being swept by them in their previous two matches earlier in the season. Ureno tied her career high with 18 kills in the game.

“I worked really hard in the offseason this summer and wanted to be a consistent player, and be someone that the team could rely on this year,” said Ureno. “It makes me happy that it’s all paying off.”

“She’s been hitting fantastic. She’s taking a lot of swings,” said City College head coach Ed Gover. “To hit 500 against two of the top teams in the state, that’s saying a lot about her and how good she is against quality players on the other side.”

Ureno is a sophomore from John H. Pitman High School in Turlock, California. She currently leads the team in kills with 188.

Ureno had an impressive freshman year at City College and got even better heading to this season.

“I feel like this year I am more confident and smarter with my hits compared to last year,” said Ureno.

Ureno was named captain this year. She wants to be a good captain and be someone that her teammates can count on. Ureno’s individual goal is to play a game without any errors and hit over 600.

“I want to be a good leader and captain on and off the court, and be a person that the girls can turn to for any reason,” said Ureno.

Ureno’s work on and off the court has been noticeable and her dedication is admired by teammates.

“She’s a captain so she’s been leading the team really well,” said teammate Carolyn Andrulis. “She’s been pushing herself on and off the court so we can really see it when she does get on the court.”

City College is off to a 12-4 start this year and currently has a 10 game winning streak. The team looks to capture its sixth consecutive conference title.

Ureno and the rest of the Vaqueros will look to make it 11 wins in a row at 6 p.m. Wednesday, Oct. 4, in Victor Valley.

Conference play begins on Oct. 13, at Ventura College. The team has high hopes of winning conference play and making it to state.