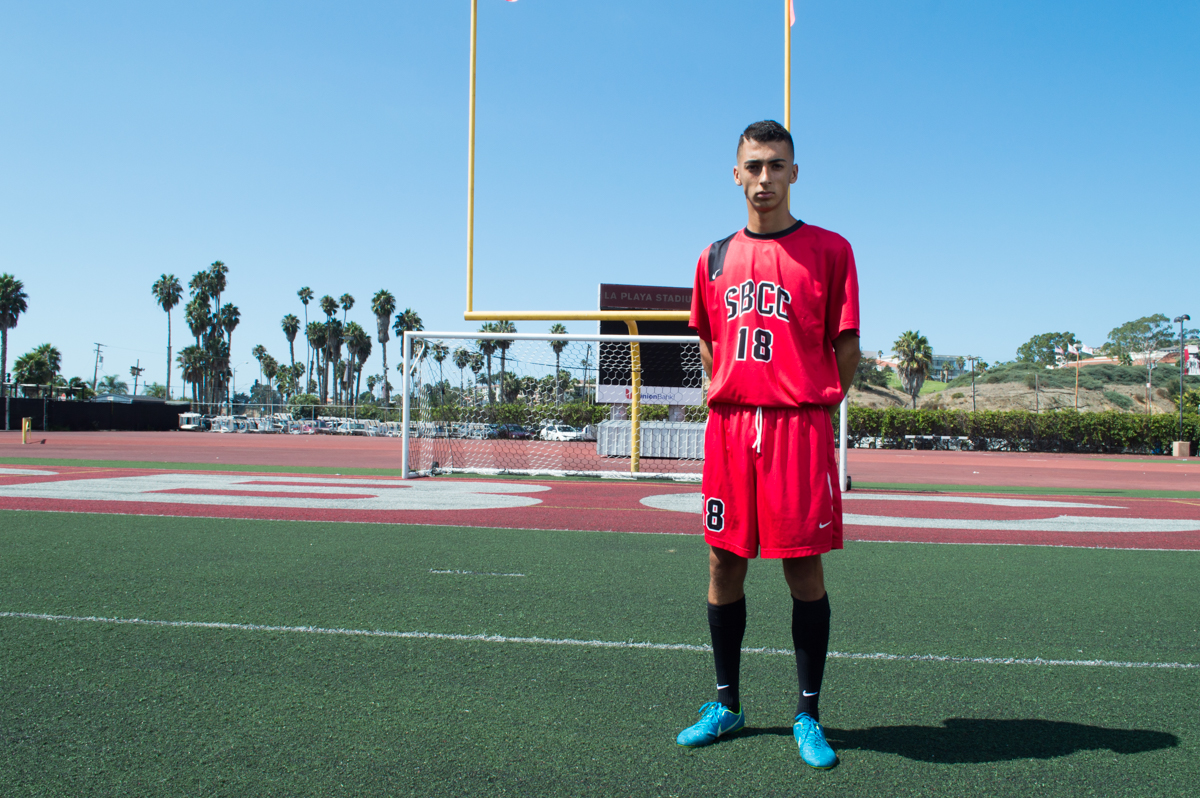 City College forward Victor Chavez stands on La Playa Stadium Sept. 15 at Santa Barbara City College. When asked what motivates him to do his best in every game, Chavez replied, “My family. My dad would always tell me before a game, ’it’s just 2 hours of working your ass off and then you get the rest of the day off.’”

City College soccer star Victor Chavez looks to continue his athletic career for years to come and one day live his dream of playing for LA Galaxy.

Chavez is a sophomore from Garden Street Academy, a private school in Santa Barbara.

Coach John Sisterson was very interested in the idea of coaching Chavez when he saw him play in high school.

“I took a soccer class with Sisterson in the summer of 2014,” Chavez said. “He wanted me to join the college soccer team but he didn’t know I was only 16 at the time.”

Chavez began playing soccer when he was just 4 years old. Garden Street Academy did not have a team, so he only played club soccer until coming to City College. He played for the Santa Barbara and Coastal Valley Soccer Clubs growing up.

“Victor is a player that can change a game,” said Sisterson. “He plays with flair, passion and is unpredictable which is what I’m looking for in a striker.”

Chavez wants to continue playing soccer as much as he can. He hopes to transfer to play at UCSB to study either kinesiology or sociology. After receiving his bachelor, he feels that playing for an Major League Soccer team is an achievable goal.

“LA Galaxy right now is my dream because it’s not that crazy, but it’s possible,” said Chavez. “It would be nice to play against my cousin who plays for the Seattle Sounders.”

“Victor is an asset to the SBCC soccer team and I’m sure would be an asset to any team he may want to play for in the future,” Sisterson said.

Chavez says that his biggest mentor in the sport is his dad. He said that his dad would go over all his mistakes with him after every game so he could work off of them and continue to improve.

Chavez has definitely seen improvement this year compared to last. This season he has become a valuable scoring option, and is a huge reason for the Vaquero’s fast start.

“Last year I had 4 goals and 4 assists overall and right now I have four goals and it’s just the fourth game,” said Chavez. “I mean I think I’m doing much better this season.”

“He is very talented and his confidence this year compared to last year is much better,” said Chavez’s teammate Jessie Jimenez. “His first year he was shy and nervous but this year he seems to have confidence and a little bit of swagger in him.”

Chavez said his favorite memory as a Vaquero is when they beat Allan Hancock 2-0 at home last season. Both goals were his.

The Vaqueros are off to an undefeated start and have high expectations for the months to come.

The team will look to stay undefeated at 7 p.m. Tuesday, Sept. 19, against Chaffey College at La Playa Stadium.