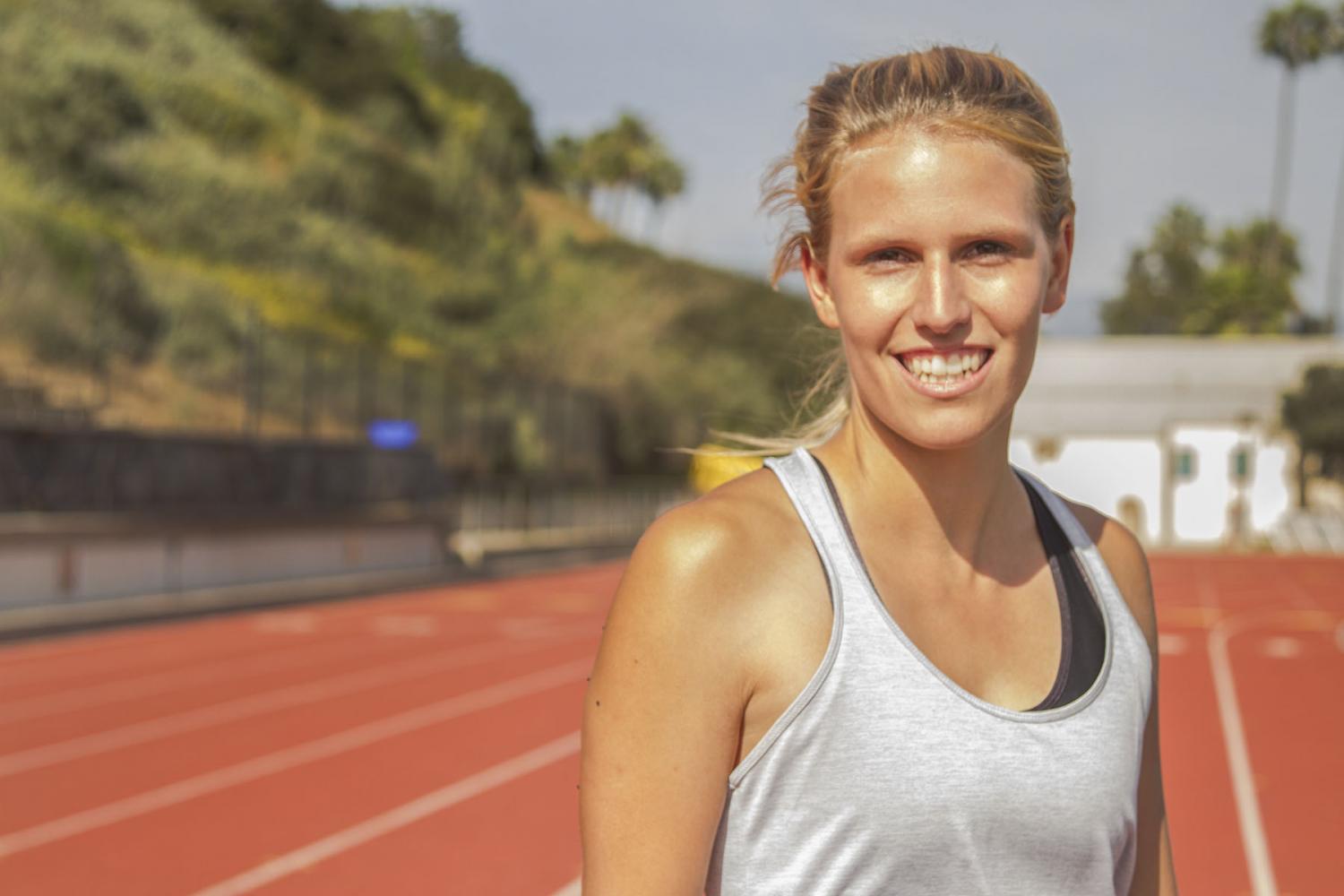 Andrea Müeller, international student athlete, on Wednesday, April 26, La Playa Stadium. Müeller was chosen as Athlete of the Week By the Santa Barbara Athletic Round Table for breaking the 26-year-old heptathlon school record.

International student-athlete Andrea Müeller has jumped, ran and thrown her way to victory, leaving her mark at City College by breaking multiple school records for the track and field team.

Müeller is a freshman from Küsnacht, Switzerland. She came to the United States to continue her studies and to learn to speak English fluently, but she’ll leave City College with much more than just that.

Müeller was selected as athlete of the week in March by the Santa Barbara Athletic Round Table for her school record-breaking heptathlon at the Jim Klein Combined Events meet at Westmont College.

She scored 4,382 points, beating the previous record set by Penny Smith 26 years ago. Müeller surpassed Smith by 43 points, placing her at No. 5 in this year’s state rankings.

“Everyone going to state is very talented, but to be able to be so talented in so many events and like do the heptathlon is just amazing to me,” teammate Madison Blaes said.

“Andrea came into our program already talented,” assistant coach Scott Santella said. “It’s not like we took, you know, a person who’s never done track and made her amazing. She was already good coming into the program.”

Müeller has had great performances all season. She led the women’s team at the City College Easter Open meet, placing first in high jump, third in long jump and fourth in the 100 hurdles.

Santella said that head coach Scott Fickerson gave the team a speech congratulating three people on the team for not missing practice, never being late and always showing up to everything.

“There’s only three out of the 46 on the team, and Andrea was one of them,” Santella said. “So that just goes to show that she’s always here and she’s always ready to work.”

Müeller comes from a family of track athletes. Both her parents did track and field when they were younger and coached her and her sister back home in Switzerland.

“[My parents] have definitely always been my role models in terms of how much time they put into track and how much they help me doing that too,” she said.

Müeller started competing when she was 11 and has been working towards catching up to her older sister, Marina, who has always been better than her.

“In track, three years can be a big difference when you’re growing up,” Müeller said. “Now when we’re getting older, the difference is getting smaller so I’m still trying to get to her level.”

Müeller said she fell in love with City College after her first visit. Her father, Chris Müeller, also came to City College to learn English and compete on the track team. She has continued her father’s legacy and will leave a huge mark in Santa Barbara.

“It’s been really nice getting to know her,” Blaes said. “I’ll miss her a lot, and even though I only knew her for a semester I feel like I know her so well.”