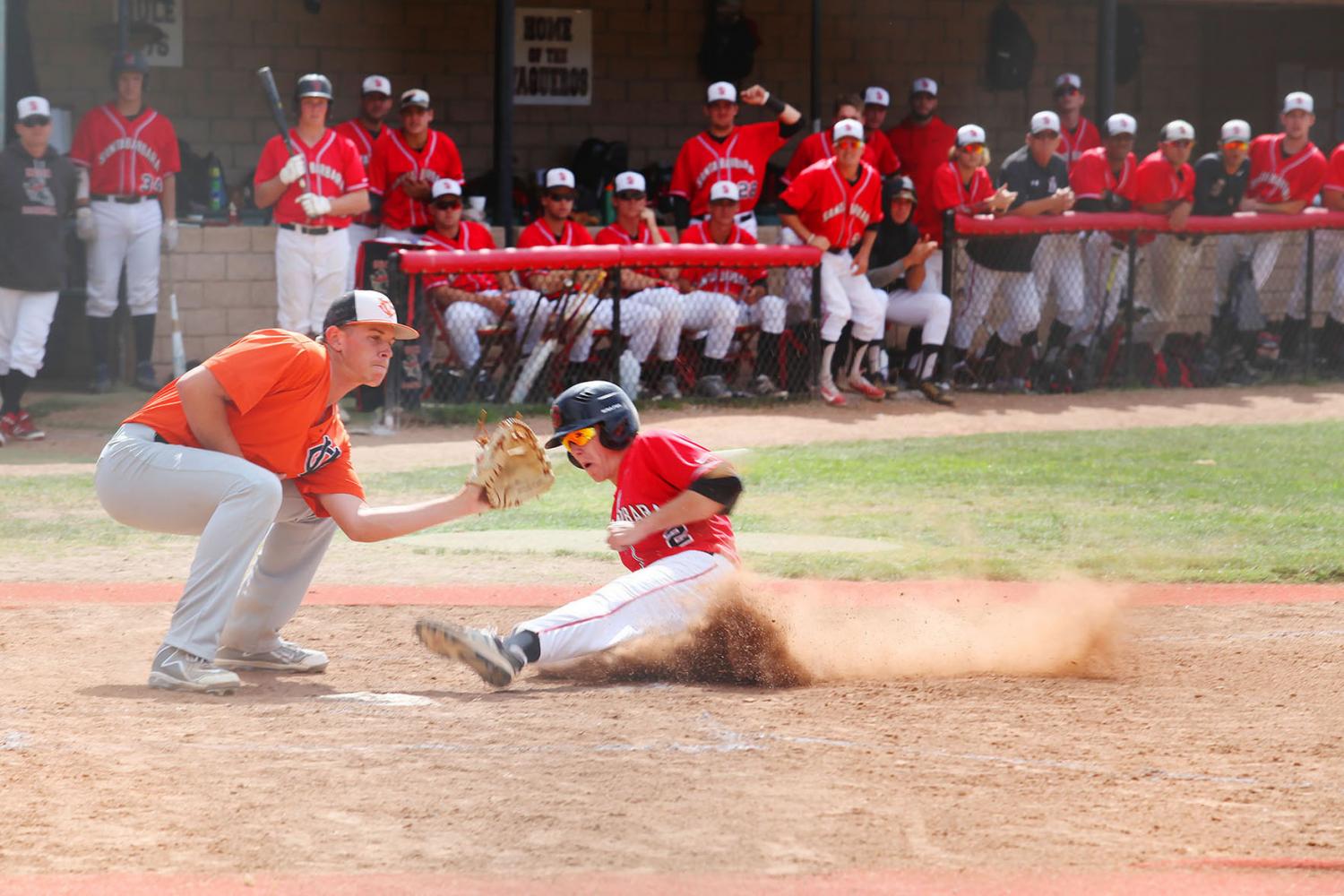 Freshman Reinhard Lautz (No. 2) slides into home base in the fifth inning and makes the run after Sophomore Tyler Rosen (No.11) hits the ball against Ventura College on Tuesday, April 25, 2017 at Pershing Park. The Vaqueros won 6-5.

This is the Vaqueros’ fourth conference championship in the last seven years. The last time they won it was in 2015.

“That’s what our goal was at the beginning of the season,” said City College outfielder Reinhard Lautz (No. 2). “To make the playoffs and win the conference and we did that.”

It was sophomore day for City College and all 17 sophomores on the team were honored before their last game at Pershing Park.

“They’ve been a huge help,” said freshman Jake Holton (No. 29). “They’ve been great leaders to all the freshman.”

Ventura struck first this game with two runs in the second inning off of City College pitcher Elliott Reece (No. 26). Reece only pitched three innings because he was on a conservative pitch count.

City College tied the game in the third inning when John Jensen (No. 13) and Tyler Rosen (No. 11) each drove in a run.

Lautz singled in two runs in the fourth inning to give the Vaqueros a 4-2 lead. He had a solid game hitting and running the bases.

His heads-up baserunning was key in putting points on the board for the Vaqueros.

“We wanted to take momentum quick,” said Lautz. “We got down early but our offense picked up and our bullpen pitched well.”

City College added another run in the fifth inning off of a double by Mitchell Sancier (No. 34), who had three hits on the day and two doubles.

The City College bullpen allowed Ventura to tie the game in the sixth inning but besides that, they pitched fairly well. Jonathan Keller (No. 41), David Appleby (No. 21) and Holton all came in and got the job done.

A scary moment occurred in the sixth inning when John Jensen took a fastball straight to the head. He was evaluated by the trainers and stayed in the game.

“That definitely rung my bell a little bit,” said Jensen. “But I was happy to get on base and help my team out.”

The Vaqueros regained the lead in the sixth after more heads-up baserunning by Lautz gave City College a 6-5 lead.

Holton came into the game in the ninth and shut down Ventura. He picked up his second save of the season.

“It’s great to win conference by ourselves,” head coach Jeff Walker said. “We’ll be at home for the first round of the Southern California Regional, which is great.”

“It’s awesome to win conference but we aren’t done yet,” said Holton who also picked up three hits in the game.

With this win, the Vaqueros improve to 23-15 overall and are the 2017 WSC North conference champions.