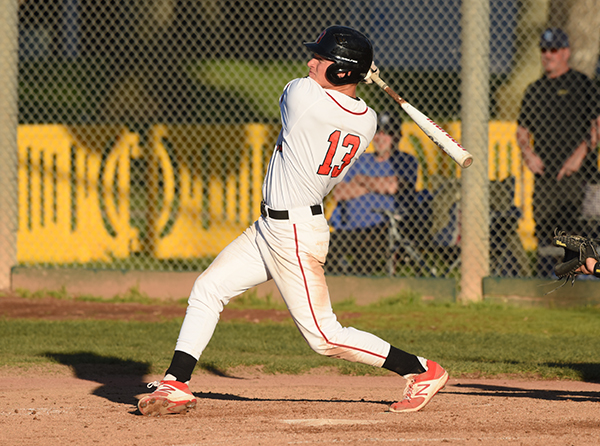 Local freshman baseball star John Jensen brought his powerful bat from Santa Barbara High School to City College and has emerged as one of the team’s top hitters.

Jensen is a Santa Barbara native who played varsity baseball for three years. He received first team all-league in his senior year and recorded one of the highest batting averages in Santa Barbara High School history.

A huge reason why Jensen chose to play at City College is because he has a “win now” mentality.

“Coach Walker pushes you in the right direction to play at the next level,” Jensen said. “I also love winning and this program knows how to do that.”

Jensen works exceptionally hard to perfect his craft and it is shown in each game. He leads the City College in hits and batting averages.

“He’s always working on his game,” teammate Tyler Rosen said. “Nobody works harder than him.”

“He could go 4-4 and he’ll still be in the cage after, working on his swing.”

Jensen is a huge fan of the Los Angeles Dodgers and looks up to star infielder Corey Seager because he feels that they have similar playing styles.

“He is a leader on and off the field and that is how I want to be looked at by my teammates, coaches and family,” Jensen said.

Jensen is majoring in liberal arts and science at City College but is unsure if he wants to continue with those subjects after he leaves Santa Barbara. His main focus at the moment is to keep his baseball career going.

“My goal is to go as far as I can after I play at CC,” said Jensen. “I will play anywhere I can to continue to play ball.”

His dream school to play baseball at is the University of Southern California. He has been a huge fan since he was a little kid.

It took Jensen a few weeks in the season to get used to the speed of college baseball after coming straight from high school. But since the beginning of March, Jensen has been swinging the bat extremely well.

“Every level you move up in this game you have to make adjustments,” said Jensen.

“His strength is the bat and he is definitely getting more comfortable at the plate,”coach Jeff Walker said. “He is one of the best hitters in California.”

Jensen recorded his first hit in a losing effort to Saddleback College early February and then added his first college home run in a win at East Los Angeles. He also had a grand slam against Reedley College in the beginning of March.

Jensen has enjoyed a memorable first year at City College and really enjoys getting the opportunity to play the game he loves with teammates he has formed extremely tight bonds with.

“Our team gets along very well,” Jensen said. “I’m thankful to be apart of this group.”

The Vaqueros currently have a 20-13 record and sit at the top of the Western State Conference North Standings with a 10-5 record.

Jensen has an extremely high batting average at home and the Vaqueros have only lost two games at home all season.

City College will look to get its second consecutive victory when they play Orange Coast College 2:30 p.m. Friday, April 14, at Pershing Park.