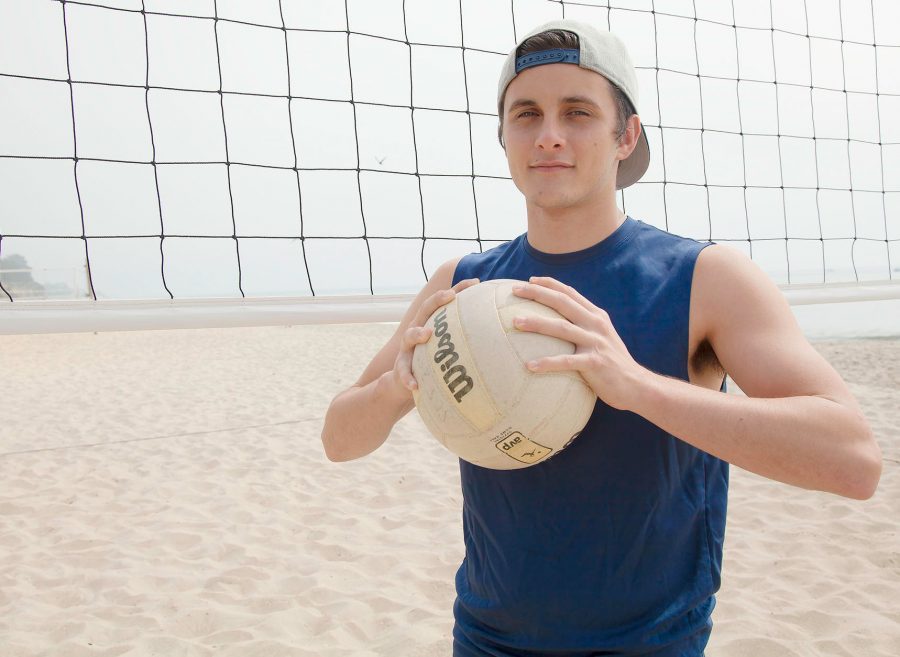 Volleyball Player Libero Kealakahi Spain on Friday, March 17, in front of the volleyball nets at East Beach. Spain is a freshman from Hawaii and is leading the men’s volleyball team in Digs and has a 2.06 dig per set ratio.

Kealakahi Spain, the freshman Libero for the City College men’s volleyball team, leads his team in digs and has been named the top defensive player after each game.

Growing up in Hilo, Hawaii, Spain moved to the mainland in Santa Barbara where he now plays for the Vaqueros.

Spain is the team’s top digger and has been named top defensive player after each game. He is leading the Vaqueros with 1.98 digs per set ratio. He strives to light up his team with his positive attitude and to be the best defensive player on the court.

“When someone makes a mistake it’s not about blaming someone it’s about learning how we can grow from it together,” Spain said. “We all love each other, it’s kind of like a family, we all play together no matter what, we win together and lose together.”

Head coach Jon Newton said Spain is an energetic player who is all in the sport and always trying to get better. He said Spain often comes to him to sit down and talk about things he has noticed about the team whether it be good or bad.

“He’s very coachable and has filled the Libero position for us nicely,” Newton said. “A lot of guys can get quiet out there, so it’s nice to have that voice and spark on the court.”

Spain said he questioned playing volleyball when he first came to City College because the thought of balancing school, work, and the hectic schedule of the sport really freaked him out.

“How I balance it out is just by doing what’s in front of me right now, I can’t necessarily focus on the semester two weeks from now because I have to focus on the things I need to do today, it’s important that I don’t trip myself out on thinking about the future,” Spain said.

According to right side hitter Quinlan Dougherty, Spain is one of the most energetic players he has ever played with.

“When I’m low on energy I look to others to feed off, and Kay is non-stop screaming his little heart out, I can always rely on him to give me and the team more energy to rise up,” Dougherty said. “He’s a great defensive player as well, I can always count on him, he always knows where to be.”

Spain said he strives to be one of the loudest athletes on the court, not only to motivate his teammates but to also show the opponent that the Vaqueros are a strong team that will not back down without a fight.

“If we lose a couple points straight and one of us finally gets a kill, sometimes I’ll be the only one screaming,” Spain said. “I know that as soon as I start, my team will start too so I like to keep that positive motivation no matter what the circumstances.”

Spain said a coach like Newton made it possible for him to play wherever he decides to transfer. He said he hopes to transfer to Cal State Northridge or University of Hawaii, Manoa and major in political science.

“I know that if I do one thing at a time I can follow through with my plan and do everything to the best of my ability in order to accomplish my goals,” Spain said.