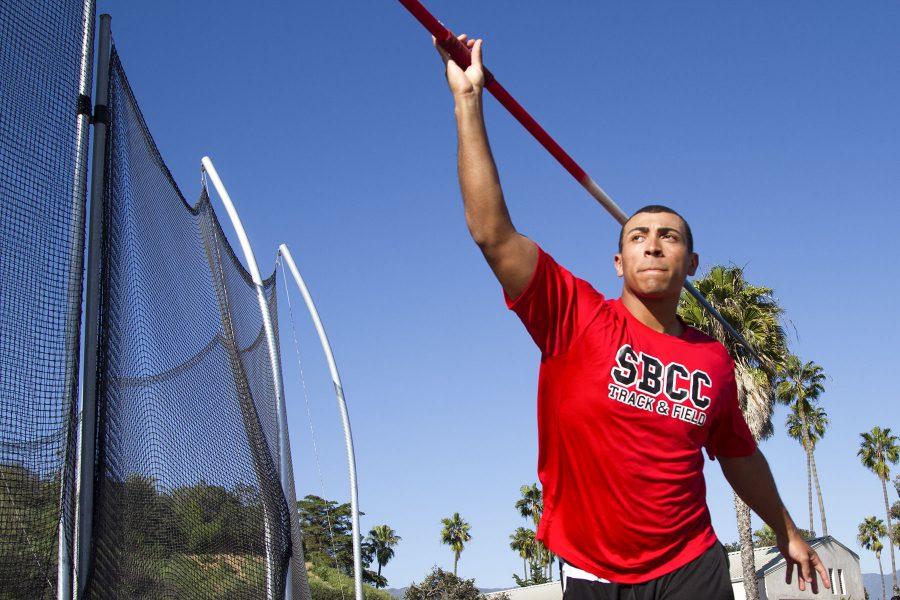 Sophomore Thrower Eddie Jones throws a javelin on Wednesday, March 15, at La Playa Stadium. Though Jones is best at shot put, he prefers the javelin.

Multisport star athlete Eddie Jones leads the way for the Vaqueros track-and-field throw team as he continues to rank in the top three in multiple events.

Jones, a sophomore from San Diego is an accomplished thrower for the track and field team who also played defensive end on the football team the past two seasons.

After five meets, Jones has won first place twice and fourth place once for shot put. He also has won first and third in javelin, as well as winning second, fifth and sixth in discus.

“He is a very versatile athlete,” said throws coach Juan Zavala. “All three of his events require a different technique, and it is hard to switch between the three during a meet. He places top three in an event nearly every time.”

Even though shot put is the least enjoyable event for Jones, Zavala convinced him to add it to his list of events this year.

“I wasn’t here last year, but I felt like he should add shot put this year,” Zavala said. “He’s done really well. He finishes top five every meet at shot put.”

Standing on the track at La Playa Stadium, Jones talked about his time spent practicing over the last two years.

“I played football before and wanted to try running [but] then I ended up trying out for throws,” Jones said. “I’ve found that it is really relaxing. Throwing isn’t as intense as football and I really enjoy doing it.”

The 6-foot-4, 250-pound athlete finished the football season with 41 total tackles and five sacks. He also earned a spot on the All-American Pacific League second-team defensive.

Jones plans to transfer to whichever four-year school that offers him a football scholarship that will best suit him for the next two years.

Jones looks up to his father because he played a big role in guiding Jones to the success he has accomplished at this point in his life.

“I thank him for what he did because I wouldn’t be in the situation I’m in now if it wasn’t for him,” Jones said. “He comes to all my meets [and] he came to all of my football games too. He is always there supporting me.”

His teammate Skylar Payovich enjoys the presence that Jones brings to the practices and games.

“He keeps us on our toes with his wittiness but also knows when to focus and compete at a high level,” Payovich said. “He’s a good friend, great competitor, and an overall great representation of what a City College athlete should be in their approach to the next level.”

The team placed first in the Central Coast Classic at Cuesta College, but has not been showing results since then. The team has a long way to go but they have a lot of potential, Jones said.

“I feel that this team has a lot of athletes that can definitely compete and strive for greatness,” Jones said. “There are a lot of individual problems within this team that hopefully we can fix.”

Zavala said that Jones has brought many things to the sport and has set the standards high.

“Eddie is really hard working and responsible,” Zavala said. “All the coaches love him [and] there is no questioning that he will get things done. He is our leader and we will miss him when he goes.”