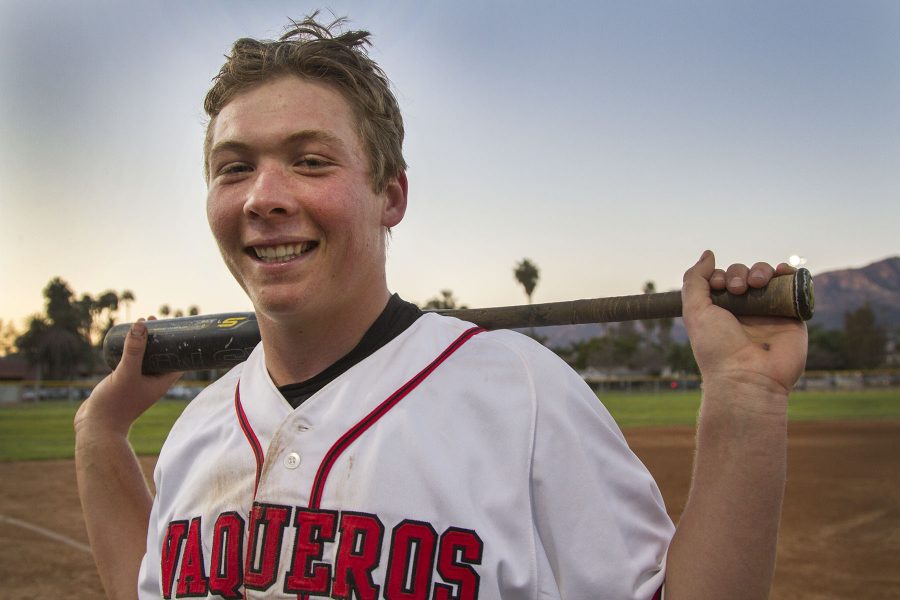 Freshman Third Baseman Jake Holton on Wednesday, March 1, at Pershing Park. Holton has the highest batting average on the team.

From winning MVP his senior year at Los Gatos High School to hitting a walk off in his first City College game­­—freshman Jake Holton’s love for baseball has continued to grow as he chases his dream of playing at the next level.

Holton grew up in Los Gatos, Calif. and has been around baseball ever since he could walk. He took his high school team to the championship his junior year and made first team in All-Leagues each year as a Los Gatos Wildcat.

Holton chose to play at City College after receiving interest from head coach Jeff Walker during his senior year of high school.

“I was curious right away,” Holton said. “Playing baseball in Santa Barbara is not a bad deal.”

Coach Walker is certainly satisfied with the way Holton is starting off his college career. He is a top hitter on the Vaquero’s lineup.

“He is one of the best right handed hitters we have had here in a long time,” Walker said.

Holton is a communications major but his main focus is to further his baseball career. He hopes to transfer and play division one baseball, preferably at a PAC 12 school.

He has a great work ethic and has earned enormous respect from teammates and coaches.

“He’s a really hard worker,” said Holton’s teammate Blake Ogburn. “He is always in the cages working on his swing.”

His hard work is paying off as he’s off to a good start for his first year in the City College uniform. So far, he has 16 hits and 12 runs batted in this season; one of the highest overall averages on the team. He also currently leads the team in total at bats.

“If I had to pick a specific [favorite] moment, it would have to be the first game of the season where I had the walk off to win the game,” Holton said.

That walk off capped off a pretty memorable City College debut for Holton. He had three hits and two runs batted in with the last one ending the game, giving the Vaqueros their first win of the season.

He has contributed two walk offs this season that led City College to victory.

Holton’s favorite thing about playing for City College is bonding with teammates. He and the fellow members of his team have begun to form a solid friendship.

To see Holton and the rest of the Vaqueros in action, they will face Allan Hancock at 2 p.m. in Pershing Park Tuesday, March, 7.