Libero of the year winner uses volleyball as stress outlet 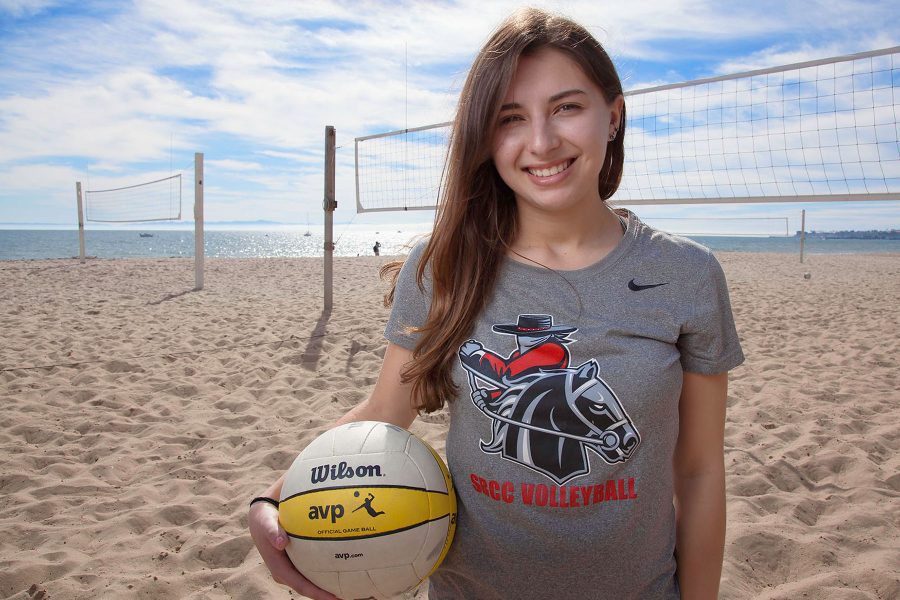 Freshman Claire Bagdasar, the starting libero for the City College women’s volleyball team, on Feb. 15, at Santa Barbara East Beach. Bagdasar has been playing volleyball since she was young and dedicates most of her time to it.

When asked what the typical day in the life for a college student is, the usual answer would be sleep, class, homework and more sleep.

However, for student athlete Claire Bagdasar and starting Libero for City College’s women’s volleyball team, this is not the case.

After last season, Bagdasar won Libero of the Year for Western State Conference. According to Bagdasar, it’s rare when a freshman gets an award like that.

Bagdasar said she chose Santa Barbara City College for the volleyball program, the coaches and the location.

“I had contacted the head coach, Ed Gover, telling him I had wanted to possibly come and play for him,” she said. “He treats his players like family, which I love.”

Coach Gover said his first impression of Bagdasar was that she was a very hard worker and played with a smile on her face, therefore leaving a positive influence on the court.

“She plays with a great deal of enthusiasm,” Gover said. “She gives her best on every point and has made some really nice changes this year with her techniques.”

During her high school career, Bagdasar endured a couple back injuries that continue to affect her today. She said her dedication and love for the sport pushes her through the injury in order to play.

“I do whatever I can to preserve my body, I do stability which is basically core and back strengthening, I work out a lot, eat well, and drink a lot of tea,” Bagdasar said.

For the women’s volleyball fans the season is a short two months, three if counting playoffs. But for the players an offseason does not mean they are completely finished.

During the offseason, all the players who want to continue are required to play beach volleyball during the Spring semester and start backup practice for the season in the first week of July.

Bagdasar said although the schedule is hectic and it’s hard to balance school, the stress is worth it in order to play the sport.

“It’s my outlet,” she said. “Whenever I step on the court, all my problems disappear and I’m able to focus on volleyball.”

Sophomore middle blocker Hannah Cantrell said there’s no doubt Bagdasar is a competitor, and as a Libero you have to be one of the most competitive players.

“I knew that she would have my back and get to every ball in order to get it to our setter and win the rally,” Cantrell said.

After attending City College Bagdasar said she wants to either transfer to the University of Tampa or the University of Denver where she hopes to play volleyball while pursuing a career as a forensic psychiatrist.

“For a while I wanted to play professionally, but I realized it didn’t pay well and I would likely have to stop school early,” she said. “I didn’t want to do that because I want to put my career first.”

“I hope to at least be a coach on the side,” Bagdasar said. “It’s my life, it always has been, and always will be.”