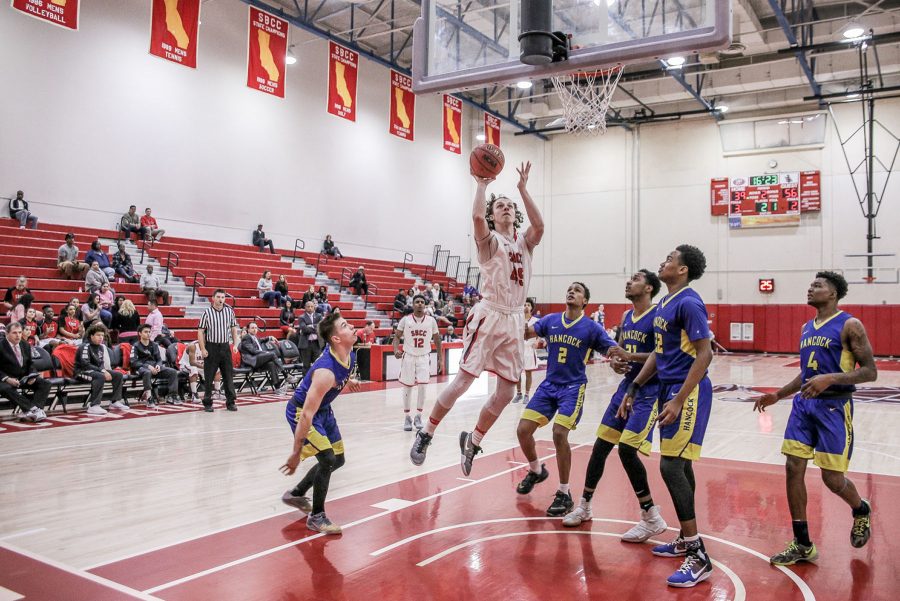 Vaquero Robert Livingston (No. 45) scores in the middle of five Hancock Bulldogs on Saturday, Feb. 11, in the sports pavilion at Santa Barbara City College. The Vaqueros lost 96-85. The proceeds from the game are going to the American Cancer Society.

All of the money made through this program will be donated to The American Cancer Society.

“The game was decided in the first half,” said coach Morris Hodges. “We had ten turnovers that led to 14 points.”

City College had quite a few turnovers and struggled to keep Hancock from grabbing offensive rebounds in the first half, but they only trailed by six.

Hancock was able to stop any run that City College tried to make. Anytime City College would make a big shot, Hancock quickly responded with a shot of their own.

Robert Livingston (No.45) and Ben Clay (No.32) had solid games both on offense and defense. They made shots in the post and grabbed a majority of City College’s rebounds.

“We got in a lot of foul trouble tonight,” said coach Hodges. “Three players had four fouls and one player fouled out of the game.”

Drayten Howell (No.12) was the leading scorer for City College with 26 points. He scored a majority in the second half and made key shots in attempt to cut into the deficit.

“I had a bad first half,” said Howell, “I had to step up and start attacking.”

City College was able to cut the lead to 14 due to consecutive three pointers by Chris Givens (No.24) and a layup by Howell.

Givens hit four three-pointers in the second half and ended the game with 16 points.

“It pumps you up on defense,” said Givens reflecting on successful shooting night, “Good defense leads to turnovers and that leads to easy shots on offense.”

The Vaqueros shot better from the field than Hancock, but a huge amount of turnovers and offensive rebounds given up kept City College from winning the game.

“This is a building block. My teammates expect this out of me,” said Howell on his high scoring outing, “I am looking to attack a lot more these last two games.”

Five out of the seven players on the roster scored in double figures and that kind of offensive efficiency can be a factor in ending the season on a winning note.

“More players shot with confidence tonight and it helps for the rest of the season especially against a team like Ventura,” Givens said.

City College will travel to Moorpark on Wednesday for their next game, then will host Ventura next Saturday in the Sports Pavilion as they close out the season with a home game.