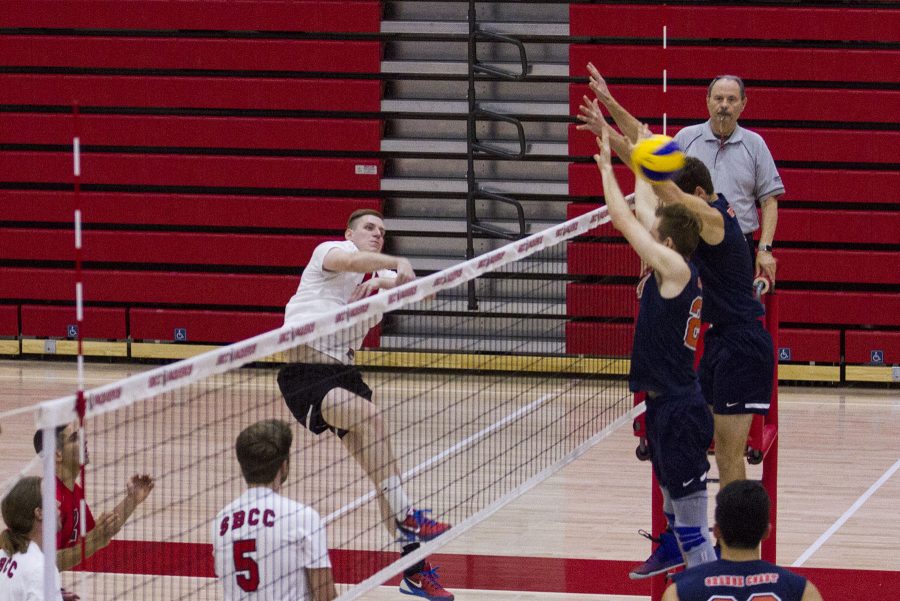 City College Vaquero Sean Reynaert (No.11) kills the ball at the beginning of set two against the defence from the Orange Coast College Pirates, Matt Ujkic (No. 7) and Bradley Hankus (No. 24) on Wednesday, Feb. 8, 2017, in the sports pavilion at Santa Barbara City College. At the beginning of set two, the Vaqueros took the lead 2-1, but the Pirates caught up and won the set, 25-12.

The City College men’s volleyball team lost in a three set game to Orange Coast College this Wednesday night in the Sports Pavilion.

According to head coach Jon Newton, Orange Coast is historically a good program that gets good kids who are fundamentally strong. When you play the top team you can be easily expose.

Sophomore Setter, Jonathan Baldwin (No.6) started the first set with a serve into Orange Coast territory, putting City College on the board 1-0.

After a set from Jonathan Baldwin (No.6), Jarrod Jordan (No.5) killed the ball to the other side finishing the first set with a score of 22-25 with Orange Coast in the lead.

“I think when we walked in the gym, the energy was a little bit down,” said Futch. “I think it was the mentality we walked in with, we have not beaten this team in 4 or 5 years.”

According to Futch, the City College wasn’t playing that great defense or closing blocks that well.

“It was the small things and we weren’t staying true to the fundamentals,” Futch said. “If we do that next time, I think it’s going to be a lot better result.”

Set two started off with Sean Reynaert (No.11) killing the ball putting City College on the board 1-2.

City College decided to call a timeout after Orange Coast gained a point streak with a score of 4-12.

Kealakahi Spain (No.1), worked to bring City College back as he dug the oncoming ball for Baldwin to kill the ball making a score of 6-14.

Refs blew the final whistle, ending the second set with a final score of 12-25.

“I don’t know if it was nerves or if they just got on a run, we let up pretty early in the game when we should’ve stayed strong,” said Jackson McDonough (No. 10). “We lost our energy, it was a loss of momentum, and a loss of heart that we struggled to get back.”

Set three started off with a serve by Orange Coast going into the net, putting City College up 1-0.

City College maintained a lead of 3-2 with a block made by Reynaert.

The Pirates quickly caught up and regained the lead.

Fighting every step of the way, Reynaert put the score at 13-16 with a block.

“It’s a good team, if we get quiet and get defensive they’re just going to take advantage of us and that’s what they did very quickly,” Newton said.