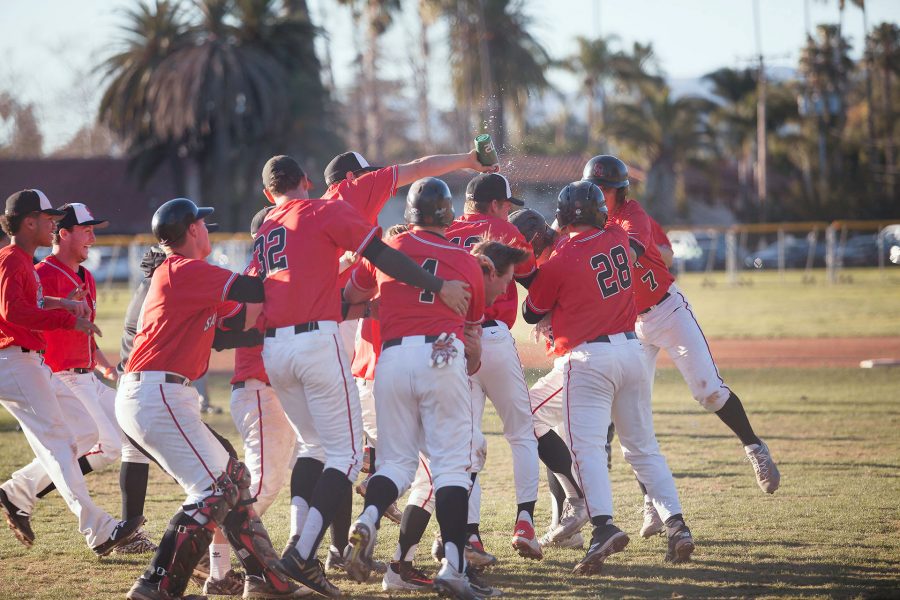 The City College Vaqueros celebrate their victory against the Cerritos College Falcons on Saturday, Jan. 28, at Pershing Park. The Vaqueros beat the Falcons, 3-2.

City College will look to carry this momentum into their upcoming series with Saddleback College.

City College took an early lead by scoring two runs in the third inning thanks to a fielder’s choice by Tyler Rosen (No.11) and a single by Jake Holton (No.29)

The score was tied going into the ninth inning but that all changed when Jake Holton hit a fly ball into right field that scored the winning run.

“I was just trying to score Steven (No.24) anyway I could whether it being a hit or a sacrifice fly,” said Jake Holton

Holton had three hits and two runs batted in during the game as well.

Elliot Reece (No.26) pitched a solid game allowing only one run in six innings of work on the mound

“It was 100% great defense,” said Reece, “We pitch to contact and let the defense do the rest.”

Cerritos scored one run in the sixth inning and then added another run in the seventh to tie the game at two.

Kyle Wade (No.23) finished the game coming in as pitcher during the ninth inning striking out one batter and holding off Cerritos to no runs.

Great pitching and good defense was the key to this opening day win. The Vaqueros held Cerritos to just two runs and made key plays at the end of some innings to keep Cerritos off of the scoreboard.

Blake Ogburn (No.20) had an excellent game on both offense and defense. He reached base three times and made crucial plays on defense that prevented runs for Cerritos.

Three runs were taken away from City College due to some questionable calls made by the Umpires that would have given them a sizable five run lead.

The Vaqueros were able to make plays when they needed to be made and ended up getting their first win of the 2017 season.

“This win gives us momentum,” said Jake Holton, “Getting that first win is always huge.”

This team has very high expectations for this season as coach Walker said, “This is the best group in my six years.”

They will look to continue their winning ways against Saddleback College on Thursday, February 2nd.

The next City College home game will be February 10th against Monterey College at 3 p.m.