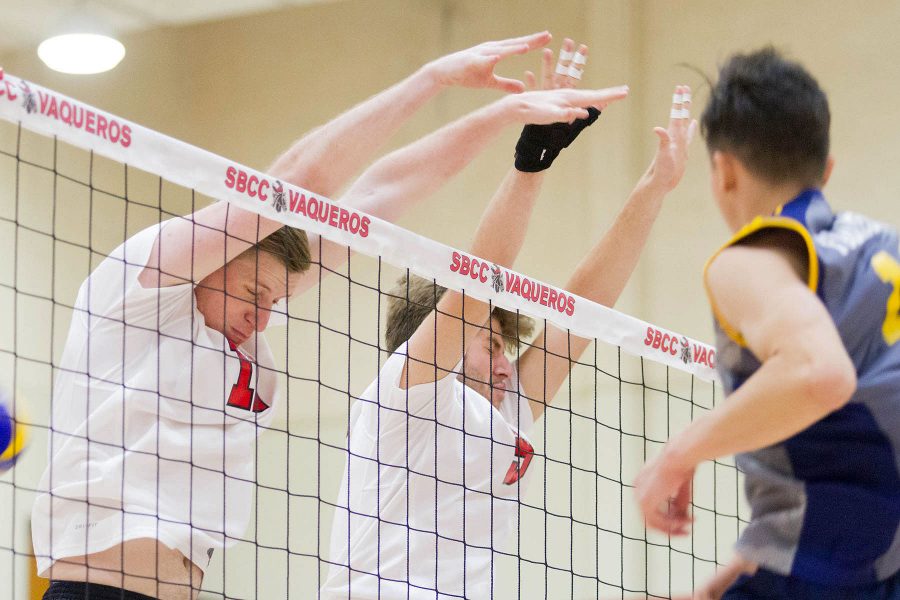 City College Vaqueros Sean Reynaert (No. 11) and Jarrod Jordan (No. 5) attempt to block an attack by the Fullerton College Hornets on Saturday, Jan. 28, in the Sports Pavilion. The Hornets won the game, 3-2.

The City College Men’s Volleyball team kicked off their season with a five set match against Fullerton losing 2-3 this Saturday night in the Sports Pavilion.

The Vaqueros and Hornets were in a tight game for the first set as freshman Right Side Hitter Quinlan Dougherty (No.13) struck a kill to set the score 25-24 putting Vaqueros in the lead. Sophomore Setter  Jonathan Baldwin ultimately dug the tip to win the set ending in 26-24.

“We’re missing a lot of our really good players, but we played excellent as a team,” said Kealakahi Spain (No.1). “It’s our first game of the season, we played a strong team.”

According to Spain, they have a lot of work to do in practice to fix up those minor errors otherwise they would have won the game.

In set two, Fullerton continuously gained points from blocks leading up to a score of 8-17. After a quick timeout called by the Hornets, the Vaqueros came together to end the second set with a final score of 18-25.

Set three started off  with a tie at 5-5 after Jackson McDonough (No.10) killed the ball into the Hornets’ side of the court. When the Hornets’ gained a lead, McDonough yet again tied the game with a block setting the score at 11-11. The Hornets took the lead with a final score of 24-22.

“I feel like we’re a bigger more physical team this year,” said Jarrod Jordan (No.5). “We started off this game pretty slow but then we started to get into it.”

Quinlan Dougherty killed the ball in Hornets’ territory while putting Vaqueros in a starting lead of 1-0 in set four.

The Vaqueros maintained their lead after Kealakahi Spain served the ball onto the other side putting the score at 7-4.

The Hornets trailed behind the Vaqueros as a block by Jarrod Jordan set the score at 23-20 forcing the Hornets to call a timeout. The Vaqueros came back to win the fourth set with a final score of 25-21.

The fifth set started off with a block by Quinlan Dougherty putting the Vaqueros on the board at 1-1.

After both teams took a quick break to switch sides on the court, a successful serve by Fullerton tied the two teams together at 8-8.

The Vaqueros trailed behind the Hornets for the duration of the set when the officials blew their last whistle, ending the fifth set with a final score of 12-15.

“That was our first game of the season, it was a good five game battle,” said head coach Jon Newton.

This being Newton’s first year with the team he said it’s not how you want to end a first game but what the team saw and got exposed to is something they can work on.

“It’s nice to have that kind of loss early in the season, where we can hopefully grow from it,” Newton said. “We have that five battle game, you’ve been in there before, hopefully next time the outcome is in your favor.”

The next home game will be on Wednesday, Feb. 1 against Santiago Canyon at 6 p.m.

An earlier version of this story misstated Fullerton Colleges’ mascot name. They are the Hornets, not the Hawks.