Moorpark takes down SBCC, 49-12, in the Beach Bowl 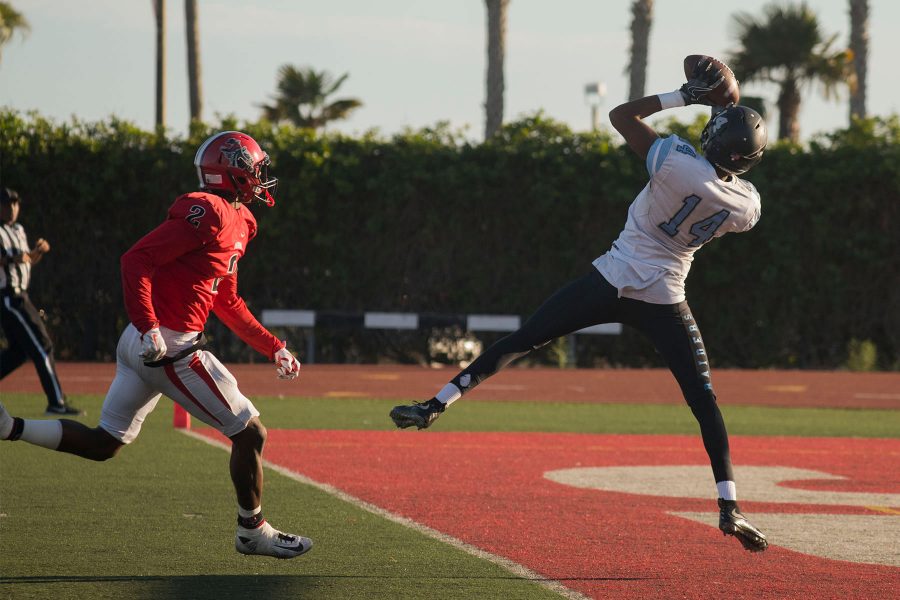 Moorpark wide receiver Emmanuel Osuchukwu (No. 14) scores their only passing touchdown against the Vaqueros during the Beach Bowl on Saturday, Nov. 19, at La Playa Stadium. The Vaqueros lost the final game of the season 49-12.

The Vaqueros succumb to injuries and ultimately couldn’t find a rhythm on either side of the ball.

The Raiders offense came out hot, taking less than a minute into the first quarter to score the game’s first touchdown.

Moorpark players could be heard shouting, “This is too easy!” following big plays.

The Vaqueros first series on offense was a three-and-out, quickly giving the Raiders back possession.

“Things went right for Moorpark,” said head coach Craig Moropoulos, who was entering his second bowl game for the Vaqueros. “They did a great job running the football and they made some big plays.”

Isaiah Johnson, Raider running back who was named MVP after the game, rushed for over 200 yards. Quarterback Kado Brown tacked on another 119 yards. Moorpark went on to rush for 449 yards, as City College could not find a way to stop the high powered run game.

“We just started falling down like flies,” said Ervin Osei-Wusu, defensive back. “Defensively, we just shot ourselves in the foot. We couldn’t stop the run.”

The Vaqueros pass defense played well, holding the Raiders to 146 passing yards. But on the ground, the Vaqueros defense was letting up an average of 9.9 yards every run.

In the middle of the first quarter, Brown scored a 12-yard touchdown off a quarterback run to stretch Moorparks lead to 21-0 early on in the game.

“I’m doing my job, why isn’t anyone else doing theirs,” said Evan Defer, Vaquero defensive linemen, as he jogged back to the sideline.

Cedric Cooper, Vaquero running back, opened up the second quarter with an explosive 41-yard touchdown run. After a failed PAT, the score was 21-6.

“A lot of things went wrong,” Cooper said. “We tried to get on the right page by trying to run the ball, but they were doing a pretty good job stopping the run.”

Cooper was voted player of the game for City College after rushing for 90 yards, averaging 5.4 yards a carry and scoring a touchdown.

“They played an overall good game on all sides of the ball,” he said. “We just tried to give it our all and we came up short.”

A long list of injuries and defensive mishaps held the Vaqueros back from playing as aggressive and determined as they did early in the season.

“We came out soft,” said Cunningham. “We just couldn’t catch a break.”

A few Vaquero alumni who were former players on the 1982 mission bowl team were on the sideline with the team.

The former players noted the differences between today’s team and the one that was playing here 30 years ago.

“We had comradery. We not only played together and went to school together we also hung out together off the field,” said former player Ernie Brown.

Brown also mentioned the team’s lack of excitement and support for each other.

“I’m noticing with this team they don’t seem to really talk much and they’re pretty quiet,” he said. “We were just constantly hollering and cheering each other on. Like I said, our comradery was completely different than this team.”

“This kind of season is really, really good for building the program for the next few years,” Moropoulos said. “It was a loss, but you know what? It was a bowl game.”