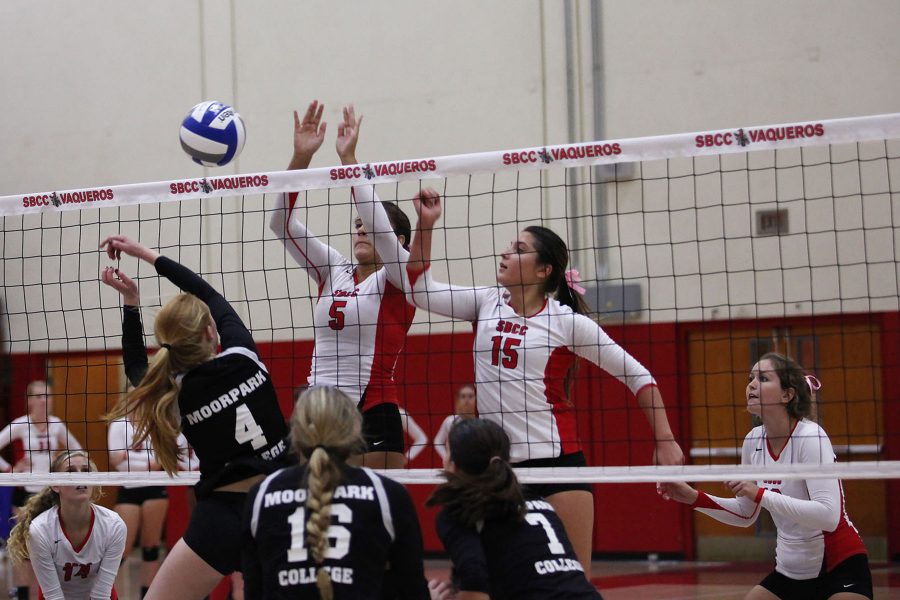 City College Sophomore Isabella Thompson (No.5) and Freshman Carolyn Andrulis (No.15) show a good defense against Moorpark College on Oct. 26, in the Sports Pavilion at City College. The Vaqueros won, 3-0.

The City College women’s volleyball team secured their third straight conference win against Moorpark College while establishing themselves as the best of the WSC North Conference.

Absent from City College’s Wednesday night’s win was head coach Ed Gover, whose mother recently passed away. In his absence, the Vaqueros looked the best they have all season.

“It was our best match of the season,” said assistant coach Steve Zelko. “Our first set was the best set of the season and we have really hit our stride.”

In the midst of the tragedy in the Gover family, the Vaqueros were in sync as they were able to blow past the Moorpark Raiders.

“Moorpark is a very good team but they are predictable,” said coach Zelko. “Once our squad figured out their strategy, we were able to finish them off in a dominant fashion.”

The Vaqueros took the first set 25-19, throughout the set were runs made by both Moorpark and City College with an unusual amount of digs for one set.

In the second set, freshman setter Kiana Pisula dumped three times and each one landed the Vaqueros a point. She recorded in total 4 kills to go along with 37 assists and 12 digs.

“Early in the year, Kiana was not dumping at all,” said Zelko. “Once we showed her how effective that move is, she has become the third star hitter.”

Isabella Thompson and outside hitter Kaylene Ureno shrugged off the “mid-season slump,” that Zelko said they were in.

“They’re play was starting to drop off,” said Zelko. “But this week, we took Kaylene and Isabella and worked with them individually and they’re now playing as well as ever.”

Thompson also had one of her best City College matches.

“We as a team had our strongest match of the season,” said Thompson. “Our communication and passion was as strong as ever.”

Even with a banged up shoulder, Thompson had seven kills and seven blocks with a team-high .636 hitting percentage. She spiked the volleyball with a velocity and force that Moorpark could not handle as City College won the second set 25-17.

Ureno posted a double-double with 14 kills and 12 digs. She celebrated with her teammates afterwards with cupcakes.

The Vaqueros opened the third set with back-to-back blocks as the squad finally assured Moorpark that they were no match for the class of the conference.

“We’re definitely going to make the state tournament,” said Carolyn Andrulis. “The rest of the season is dedicated to Coach [Gover] and his family as we strive to win a championship.”

With one loss in the Volleyball family, the rest of the squad and their coaches looked like a team that could very well be taking court for the state championship in a few weeks. The Vaqueros are ranked third in state as of right now and look primed to win the WSC North in convincing fashion.

The Vaqueros will look to win their seventh consecutive match on Friday when they travel to take on Allan Hancock College.