Sisterson is the most successful soccer coach in SBCC history 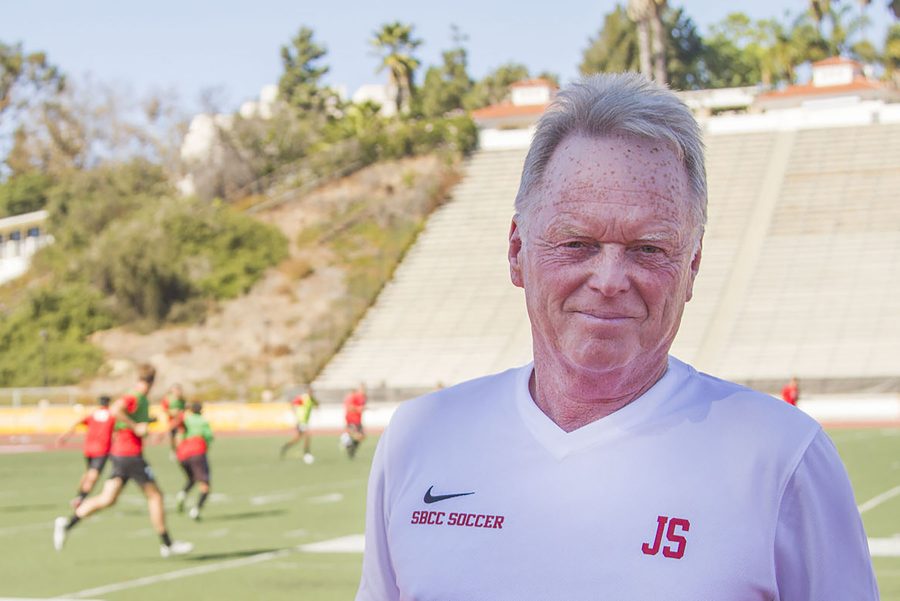 Under the lights of La Playa Stadium, a slow mist rolls in from Leadbetter Beach. John Sisterson, head soccer coach, surveys his men’s squad during a match against Allan Hancock College.

Six hours earlier, with the sun beating down to illuminate the waves crashing in the background, his women’s soccer team defeated the Hancock women’s team in a 5-0 shutout.

“I think I’m 63 on Monday and people say it’s about time you’d start thinking of retiring,” he said. “But I don’t. I enjoy working with the groups and the players, and I always have.”

As the referee blew the final whistle at La Playa stadium, the Vaqueros had shut out their opponent 2-0. Sisterson had captured win No. 121, making him the winningest men’s soccer coach in City College’s history.

Sisterson said his passion for soccer sprawls back to his days as a child in northeast England, an area referred to as the “the hotbed of soccer.” Here, he would regularly watch his favorite club, based out of the city of Sunderland, play in matches.

“I would go watch two games a week,” he said. “I would go stand there and watch my favorite team Sunderland play in what’s now known as the Premier League.”

He recalls being 6 years old and being hoisted up by 70,000 cheering fans as they passed him down to the front of the crowd, a popular British tradition.

Sisterson’s first interest in being a coach came around the same time he was hoisted up by those cheering Sunderland fans.

He recalls that back then the manager (head coach) of the club would typically be sitting in the press boxes instead of down on the field. When things were not going right with the team, the manager would descend down to the pitch to straighten things out, much to the delight of the roaring crowd.

“That was the first image I can remember as a kid of first recognizing that a coach can make a difference,” he said.

Sisterson worked with a diverse set of athletes before coming to City College.

From 2003 to 2009, he coached the U.S. Deaf Association’s women’s team. In 2005 he led them to a gold medal victory at the Deaflympics in Melbourne, Australia. Their victory over Russia capped off an undefeated 7-0 Olympic run.

He had a brief tenure in 2004 as head coach of the men and women’s team at West Texas A&M University, in the city of Canyon.

He came to City College in 2005 to coach the women’s team, and was appointed as head coach of the men’s team in 2008.

Since coming here, Sisterson has collected plenty of accolades with both squads.

The dual WSC North championships in 2011 were the first time that any school had won both titles in the same year.

Jesse Jimenez, a freshman midfielder who also played for Dos Pueblos High School, is playing for Sisterson for his first time.

“He’s passionate for the sport and for the players,” he said, “and just wants the best for us.”